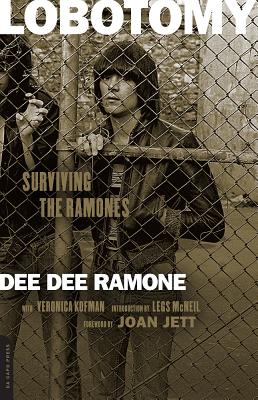 Lobotomy is a lurid and unlikely temperance tract from the underbelly of rock 'n' roll. Taking readers on a wild rollercoaster ride from his crazy childhood in Berlin and Munich to his lonely methadone-soaked stay at a cheap hotel in Earl's Court and newfound peace on the straight and narrow, Dee Dee Ramone catapults readers into the raw world of sex, addiction, and two-minute songs. It isn't pretty. With the velocity of a Ramones song, Lobotomy rockets from nights at CBGB's to the breakup of the Ramones' happy family with an unrelenting backbeat of hate and squalor: his girlfriend ODs; drug buddy Johnny Thunders steals his ode to heroin, "Chinese Rock"; Sid Vicious shoots up using toilet water; and a pistol-wielding Phil Spector holds the band hostage in Beverly Hills. Hey! Ho! Let's go!

Dee Dee Ramone was the bassist and songwriter for the Ramones, the creators and best exemplars of punk rock. He left the band in 1989, but performed one last time with his brothers in 1996. He is the author of Lobotomy: Surviving the Ramones.

"Dee Dee was the heart and soul of the Ramones. He brought that aspect to everything he did. Dee Dee set the tone for who and what the Ramones were, giving their identity consistency, and setting the bar for what would eventually define punk rock."—Joan Jett, from the foreword

"Dee Dee Ramone's life was nothing sort of extreme. He was plagued by demons, but created music as if by angels. As chaotic as his reality was, his music was just as brilliant. Dee Dee lived and died by the sword we call rock 'n' roll. Now let him tell you as only he could!"—Jerry Only, The Misfits

"There's no one in a better position to write a definitive work on the New York punk scene.... [Lobotomy] is a compelling, raw nerve rampage through the frazzled brain of one of rock's most tragic heroes."—Ian Fortnam, Vox

Waterbury Republican-American, 6/19/16
“Dee Dee's memoir is alternately funny and sad and well worth revisiting to get a real feel for the darker side of the punk rock legacy.”

SLUG , 6/29/16
“A perfect glimpse into the life of the controversial bassist.”