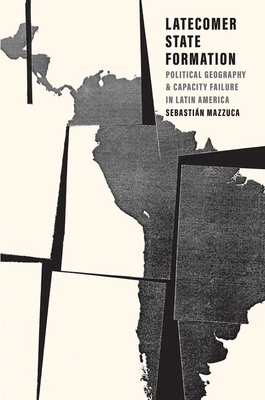 “Ambitious and rich. . . . A sweeping and general theory of state formation and detailed historical reconstruction of essential events in Latin American political development. It combines structural elements with a novel emphasis on the political incentives and bargaining that shaped the map we have today.”—Hillel David Soifer, Governance

Latin American governments systematically fail to provide the key public goods for their societies to prosper. Sebastián Mazzuca argues that the secret of Latin America’s failure is that its states were “born weak,” in contrast to states in western Europe, North America, and Japan. State formation in post-Independence Latin America occurred in a period when capitalism, rather than war, was the key driver forging countries. In pursuing the short-term benefits of international trade, Latin American leaders created states with chronic weaknesses, notably patrimonial administrations and dysfunctional regional combinations. Mazzuca analyzes pathways leading to variations in country size and level of pacification: “port-led” state formation in Argentina and Brazil; “party-led” in Mexico, Colombia, and Uruguay; and “lord-led” in Central America, Venezuela, and Peru.

Sebastián Mazzuca is assistant professor of political science at Johns Hopkins University. His research and teaching focus on the political economy of development, democratization, and state formation.

“Ambitious and rich. . . . A sweeping and general theory of state formation and detailed historical reconstruction of essential events in Latin American political development. It combines structural elements with a novel emphasis on the political incentives and bargaining that shaped the map we have today.”—Hillel David Soifer, Governance

“In this dazzling and conceptually innovative book, Mazzuca distills the core logic of state formation in Latin America.  Latecomer State Formation illuminates how global historical forces shape the very size and capacity of modern states. Magisterial and incisive, it is indispensable reading for any comparative scholar of state-building in the post-colonial world.”—Maya Tudor, University of Oxford


“Each page explodes with intellectual energy and new insights. It teaches a profound lesson: forming a state is not the same as state-building. Historically rich and conceptually innovative, this is the best book I have read on state-building in over a decade.”—Daniel Ziblatt, Harvard University


“Trade makes states, but it makes weaker states than war. Mazzuca sheds new light on why Latin American politicians formed states that were territorially solid yet institutionally incapable. In our collective quest to understand non-European states, Mazzuca’s far-reaching study helps us draw lessons from Latin America as much as from Europe.”—Dan Slater, University of Michigan


“An extraordinarily interesting book about a central theme in social science and history: how states are created and how they become effective. The book combines deep and broad historical research on Latin America with major conceptual and theoretical innovations.”—Scott Mainwaring, University of Notre Dame