Radical Wordsworth: The Poet Who Changed the World (Hardcover) 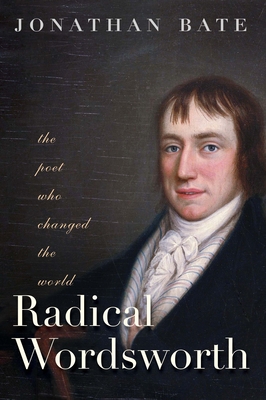 By Jonathan Bate
$38.00
Unavailable, Out of Stock, or Out of Print

“The finest modern introduction to [Wordsworth's] work, life and impact. It shows how and why ‘Wordsworth made a difference.'”—Boyd Tonkin, Financial Times

Named a Favorite Book of 2020 by The Progressive

Published in time for the 250th anniversary of William Wordsworth’s birth, this is the biography of a great poetic genius, a revolutionary who changed the world. Wordsworth rejoiced in the French Revolution and played a central role in the cultural upheaval that we call the Romantic Revolution.

He and his fellow Romantics changed forever the way we think about childhood, the sense of the self, our connection to the natural environment, and the purpose of poetry. But his was also a revolutionary life in the old sense of the word, insofar as his art was of memory, the return of the past, the circling back to childhood and youth. This beautifully written biography is purposefully fragmentary, momentary, and selective, opening up what Wordsworth called "the hiding-places of my power."

Sir Jonathan Bate is Foundation Professor of Environmental Humanities at Arizona State University and a senior research fellow at Oxford University, where he was formerly provost of Worcester College.

“A bold and bracing account, masterful with its material, patiently brilliant in reading the poems, and gloriously convincing about its subject’s social significance . . .  a finely authoritative reading, rather than simple record, of Wordsworth’s life . . .  the distillation of a lifetime’s expertise by a leading scholar and biographer.—Daily Telegraph

“Radical Wordsworth . . . is guided by enthusiasm. It is all the better for it. This excellent, intellectually rousing book is about the young poet. This is Wordsworth the dreamy, serious radical glimpsed flying across frozen lakes on his skates, or marvelling at revolutionary Paris, or falling in love with the beautiful Annette Vallon in France. This is the Wordsworth who was the ‘pure emanation of the spirit of his age’, who pitied the poor, loved the natural world and believed ‘all that we behold is full of blessings.’”—The Times

“This new book, like everything Bate writes, richly repays reading, and bears comparison with his pioneering life of Ted Hughes.”—John Carey, Sunday Times

“[A] marvelous new biography of Wordsworth . . . that celebrates the fact that our lives are marked by turning points, not routine. . . . [An] inspiring, fleet-footed book.”—The Guardian

“Bate is a supremely capable guide, steeped in the poet’s work and milieu . . . Radical Wordsworth—‘radical’ not just in his youthful politics but in his poetry’s return to the roots of selfhood and society—deserves to take its place as the finest modern introduction to his work, life and impact. It shows how and why ‘Wordsworth made a difference’ . . . Bate delivers not a long-distance trudge of the kind the poet loved . . . but a collage of crisply written, intensively researched scenes . . . That approach suits a writer who argued that pivotal ‘spots of time’, fixed in memory, can order our past and heal our present.”—Boyd Tonkin, Financial Times

“[An] appealing new biography. . . . Mr. Bate’s radical focus is less political than literary. He illuminates Wordsworth’s poetic originality . . . [and] clarifies some of the ways—multifarious, incongruous—in which Wordsworth marshals various voices to forge the complex tone of ‘The Prelude.’”—Brad Leithauser, Wall Street Journal

“In this energetic literary biography . . . Bate . . . makes a strong case that, when Wordsworth was good, he was transformative. . . . Appealingly conveying his own love of and frustrations with Wordsworth, Bate demonstrates in his delightful volume how, flaws and all, the poet ‘made a difference’ in the way future generations would think and feel.”—Publishers Weekly

"A captivating read. Jonathan Bate has produced a life of the longest living major Romantic poet foreshortened through those 'spots of time' that left their most enduring impact on his mind."—Denise Gigante, Stanford University

"Jonathan Bate brings to Wordsworth's poetry a great fund of local knowledge and a sympathy both personal and profound. This remarkable biography encompasses a life story and a subtle critical commentary, but it is also an invitation to think and act in defense of the natural world, 'the place where in the end / We find our happiness, or not at all.'"—David Bromwich, author of The Intellectual Life of Edmund Burke

"Wordsworth did indeed change the world, and Jonathan Bate superbly explains not only how the poet achieved that, but also why the change is for the better. This book has something for both those who know Wordsworth a little, and a lot."—James Engell, Harvard University

“This critical biography fills a long-felt need and does it superbly, making a convincing case for the great poet’s originality and imaginative power. Skillfully interweaving perceptive criticism with biographical contexts, Jonathan Bate shows in depth how Wordsworth created a new poetry based in the language of ordinary life.”—Leo Damrosch, author of The Club: Johnson, Boswell, and the Friends Who Shaped an Age