Channeling the Past: Politicizing History in Postwar America (Studies in American Thought and Culture) (Paperback) 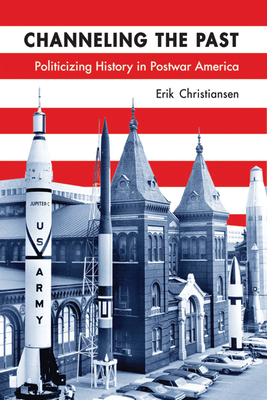 By Erik Christiansen
$29.95
Unavailable, Out of Stock, or Out of Print

After the turmoil of the Great Depression and World War II, Americans looked to the nation’s more distant past for lessons to inform its uncertain future. By applying recent and emerging techniques in mass communication—including radio and television programs and commercial book clubs—American elites working in media, commerce, and government used history to confer authority on their respective messages.
With insight and wit, Erik Christiansen uncovers in Channeling the Past the ways that powerful corporations rewrote history to strengthen the postwar corporate state, while progressives, communists, and other leftists vied to make their own versions of the past more popular. Christiansen looks closely at several notable initiatives—CBS’s flashback You Are There program; the Smithsonian Museum of American History, constructed in the late 1950s; the Cavalcade of America program sponsored by the Du Pont Company; the History Book Club; and the Freedom Train, a museum on rails that traveled the country from 1947 to 1949 exhibiting historic documents and flags, including original copies of the U.S. Constitution and the Magna Carta.
It is often said that history is written by the victors, but Christiansen offers a more nuanced perspective: history is constantly remade to suit the objectives of those with the resources to do it. He provides dramatic evidence of sophisticated calculations that influenced both public opinion and historical memory, and shows that Americans’ relationships with the past changed as a result.

“Christiansen’s examination of the making of popular history in postwar America adds greatly to contemporary debates over how Americans do and do not use their history in public. It harkens back to a time before cable television and the Internet, when ‘mass media’ was more of a common experience. In particular, his investigation of how Du Pont and BBDO used audience research to shape the public history they presented on their radio and television programs is a real eye-opener that readers won’t forget.”—David Glassberg, University of Massachusetts, Amherst

“Postwar America was a surprisingly creative time for making U.S. history come alive and for disseminating the ‘lessons’ of that history to broad and diverse American publics. Erik Christiansen explains why this was so and, through meticulous research, reconstructs the rise and fall of five key public history initiatives. A probing, illuminating, and elegantly written work.”—Gary Gerstle, Vanderbilt University


“This is an insightful analysis of the uses and misuses of history in an age of high anxiety and political polarization. It’s a timely and intellectually nuanced work that will appeal to both scholars and serious general readers with an interest in Cold War intellectualism.”—Library Journal


“This very accessible, fast-moving read examines revisionist movements from the Great Depression through the early stages of the Cold War.”—Choice


“Channeling the Past may focus mainly on corporations rewriting history to influence public opinion, but it also delves into attempts by various groups on the political left to bolster their message by invoking the past.”—Minnesota History Magazine