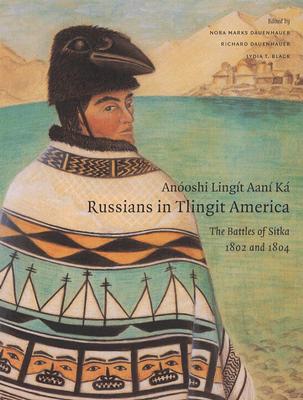 This is book number 4 in the Classics of Tlingit Oral Literature series.

Winner of an American Book Award from the Before Columbus Foundation

The Battles of Sitka were seminal events in the history of the Tlingit people, in the multicultural history of Alaska, and, ultimately, in the history of America. The Tlingits saw themselves as victors even as they formally ceded to the Russians the site of their village and fort, now knows as Sitka. This book covers the period from the first arrival of European and American fur traders in Tlingit territory to the establishment of a permanent Russian presence in the Pacific Northwest. It presents transcriptions and English translations of Tlingit oral traditions recorded almost fifty years ago and translations of newly available Russian historical documents. Although independent in origin and transmission, these accounts support one another to a remarkable degree on the main historical point.

The Tlingit-Russian conflict is usually presented as a confrontation between "whites" with superior arms, and brave but outnumbered and poorly armed Natives. Nothing could be further from the truth. The Tlingits saw themselves as victors even as they formally ceded to the Russians the site of their village and fort, now known as Sitka. Setting aside ancient rules of story ownership, a new generation of Tlingit clan leaders has decided to publish the stories told by their ancestors so that the Tlingit point of view would be known and succeeding generations would not forget their people's history.

Including Russian historical documents, travelers' accounts of information interactions between the formerly warring parties after the battles, and Dr. W. Schuhmacher's work on the role played by British and American skippers, this book inquires into and provides some answers to the fundamental question, Who owns history?

Photographs of objects now in Russian and American museums - from the favorite battle hammer of Tlingit war chief Katlian to the metal ceremonial hat Baranov commissioned for the peace ceremony - enrich the book, along with portraits of key historical figures and eighteenth- and early nineteenth-century charts of Tlingit territory. Also included is the journal of Dmitrii Tarkhanov, a gazetteer, a glossary, Tlingit and Russian name lists, and an index.