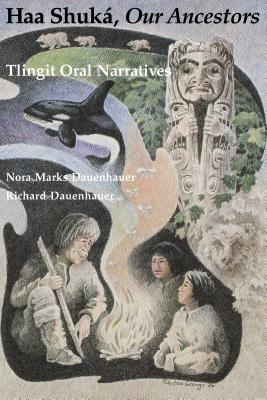 This is book number 1 in the Classics of Tlingit Oral Literature series.

These gripping and powerful prose narratives relate monumental events in the lives of the forebears of Tlingit clans, from the prehistoric migration to the coast of Southeast Alaska to the first contact with Europeans. The stories were recorded from the 1960s to the present by twelve tradition bearers who where passing down for future generations the accounts of haa shuka, which means "our ancestors." Their narratives tell of the origin of social and spiritual concepts and explain the complex relationships among members of a given clan to their relatives in other clans, to spirits of the land where the vents took place, to the spirits of departed ancestors, and to the spirits of various animals, including killer whale and bear.

The focus here is on the stories and story tellers themselves, who lived amazingly different lives, reflecting in a small way the complexity of Tlingit life in the twentieth century, a period characterized by unprecedented political, economic, and social change. The stories were told in Tlingit and then transcribed from the tape recorded versions. The editors have attempted to write these stories the way they were told, and to then translate them into English keeping the unique Tlingit oral style.

This book will be of interest to the general reader of Native American literature and comparative literature, as well as to folklorists, linguists, and anthropologists. Of special interest to linguist will be the new texts (transcribed in three different Tlingit dialects) containing many hitherto unattested grammatical forms.