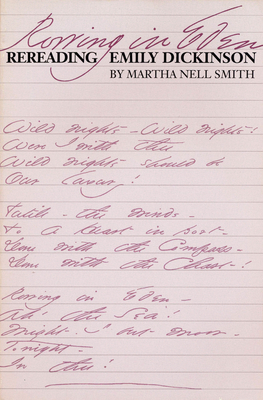 Emily Dickinson wrote a "letter to the world" and left it lying in her drawer more than a century ago. This widely admired epistle was her poems, which were never conventionally published in book form during her lifetime. Since the posthumous discovery of her work, general readers and literary scholars alike have puzzled over this paradox of wanting to communicate widely and yet apparently refusing to publish. In this pathbreaking study, Martha Nell Smith unravels the paradox by boldly recasting two of the oldest and still most frequently asked questions about Emily Dickinson: Why didn't she publish more poems while she was alive? and Who was her most important contemporary audience?

Regarding the question of publication, Smith urges a reconception of the act of publication itself. She argues that Dickinson did publish her work in letters and in forty manuscript books that circulated among a cultured network of correspondents, most important of whom was her sister-in-law, Susan Huntington Gilbert Dickinson. Rather than considering this material unpublished because unprinted, Smith views its alternative publication as a conscious strategy on the poet's part, a daring poetic experiment that also included Dickinson's unusual punctuation, line breaks, stanza divisions, calligraphic orthography, and bookmaking—all the characteristics that later editors tried to standardize or eliminate in preparing the poems for printing.

Dickinson's relationship with her most important reader, Sue Dickinson, has also been lost or distorted by multiple levels of censorship, Smith finds. Emphasizing the poet-sustaining aspects of the passionate bonds between the two women, Smith shows that their relationship was both textual and sexual. Based on study of the actual holograph poems, Smith reveals the extent of Sue Dickinson's collaboration in the production of poems, most notably "Safe in Their Alabaster Chambers." This finding will surely challenge the popular conception of the isolated, withdrawn Emily Dickinson.

Well-versed in poststructuralist, feminist, and new textual criticism, Rowing in Eden uncovers the process by which the conventional portrait of Emily Dickinson was drawn and offers readers a chance to go back to original letters and poems and look at the poet and her work through new eyes. It will be of great interest to a wide audience in literary and feminist studies.

Martha Nell Smith is a professor of English and the founding director of the Maryland Institute for Technology in the Humanities at the University of Maryland.

. . . original and provocative . . . Martha Nell Smith convincingly answers those who continue to ask why Dickinson did not publish more while she was alive. The author also offers a revisionist interpretation of the relationship between the poet and her sister-in-law, Susan Gilbert Dickinson, whose role in both the poetic process and subsequent publication of Dickinson’s work she contends is much more significant than critics to date believe.
— Belles Lettres