The Exiles and Other Stories (Texas Pan American Series) (Paperback) 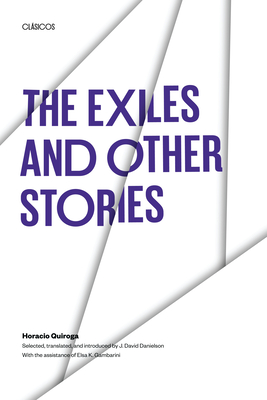 Tales of risk and danger, suffering, disease, horror, and death. Tales, also, of courage and dignity, hard work, and human endurance in the face of hostile nature and the frequent brutality of men. And tales flavored with piquant touches of humor and bemused irony. These are the stories of the Uruguayan writer Horacio Quiroga, here presented in an important compilation of thirteen of his most compelling tales, sensitively selected and translated by J. David Danielson. Author of some two hundred pieces of fiction, often compared to the works of Kipling, Jack London, and Edgar Allan Poe, Quiroga set many of his stories in the territory of Misiones in northeastern Argentina, the subtropical jungle region where he spent much of his life. Included here are stories from Los desterrados (1926) often said to be his best book, as well as others from Cuentos de amor de locura y de muerte (1917), Anaconda (1921), and El Desierto (1924). The publication of this selection marks the first appearance in English of all but two of the thirteen stories. Quiroga here presents a wide range of characters: parents and children, servant girls and prostitutes, landowners and lumber barons, foremen and laborers, natives and immigrants, in stories pervaded by a vision of life that is elemental, incisive, and essentially tragic. The Exiles and Other Stories shows the versatility and skill that have made him a classic Spanish American writer. It complements and illumines The Decapitated Chicken and Other Stories, selected and translated by Margaret Sayers Peden, also published by the University of Texas Press.

J. David Danielson (1916–2010) was Professor of Foreign Languages and Literatures at the University of Hartford, Connecticut.Elsa K. Gambarini taught Spanish at Yale University for several years.