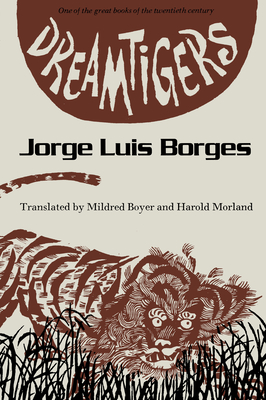 Dreamtigers has been heralded as one of the literary masterpieces of the twentieth century by Mortimer J. Adler, editor of Great Books of the Western World. It has been acknowledged by its author as his most personal work. Composed of poems, parables, and stories, sketches and apocryphal quotations, Dreamtigers at first glance appears to be a sampler—albeit a dazzling one—of the master's work. Upon closer examination, however, the reader discovers the book to be a subtly and organically unified self-revelation.

Dreamtigers explores the mysterious territory that lies between the dreams of the creative artist and the "real" world. The central vision of the work is that of a recluse in the "enveloping serenity " of a library, looking ahead to the time when he will have disappeared but in the timeless world of his books will continue his dialogue with the immortals of the past — Homer, Don Quixote, Shakespeare. Like Homer, the maker of these dreams is afflicted with failing sight. Still, he dreams of tigers real and imagined and reflects upon of a life that, above all, has been intensely introspective, a life of calm self-possession and absorption in the world of the imagination. At the same time he is keenly aware of that other Borges, the public figure about whom he reads with mixed emotions: "It's the other one, it's Borges, that things happen to."

First published in Buenos Aires in 1960 as El Hacedor, Dreamtigers was translated into English by Mildred Boyer, professor emerita of romance languages at the University of Texas at Austin, and the poet Harold Morland. The late Miguel Enguídanos, who was Centennial Professor of Spanish at Vanderbilt University, wrote the introduction to this volume, which is enhanced by woodcuts by the renowned artist Antonio Frasconi.

One feels in Dreamtigers a calm, an intimation of a truce, a tranquil fragility. Like so many last or near-last works... Dreamtigers preserves the author's life-long concerns, but drained of urgency; horror has yielded to a resigned humorousness
— John Updike