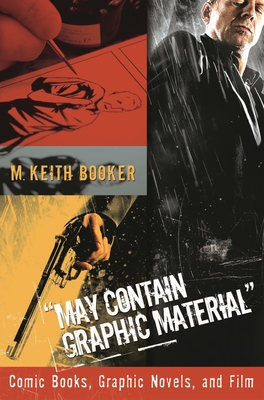 By M. Keith Booker
This Book Is Not Sold Online - Inquire In Store

Since the first Superman film came to the screen in 1978, films adapted from comics have become increasingly important as a film form. But 1978 was also important because it was the year of release for Will Eisner's A Contract with God, and Other Stories, generally credited as the first long-form comic book to label itself a graphic novel. Since that time, advances in computer-generated special effects have significantly improved the ability of film to capture the style and action of comics, producing such hugely successful films as X-Men (2000) and Spider-Man (2002). Meanwhile, the genre of the graphic novel has greatly evolved as a form--especially through the works of people like Frank Miller and Alan Moore--taking comics in dramatically new and different directions, generally darker and more serious than conventional comics. Graphic novels have also formed the basis for less visually spectacular, but intelligent and thoughtful films such as Ghost World (2001) and American Splendor (2002). Booker surveys this important development in film history, tracking the movement to a more mature style in comics, and then a more mature style in films about comics. He focuses on detailed discussions of 15 major films or franchises, but also considers the general impact of graphic novels on the style and content of American film in general.

The Batman franchise, especially in the 1989 film and in 2005's Batman Begins, has provided adaptations of a classic comic-book motif inflected through the Dark Knight graphic novels of Frank Miller. The marriage of new film technology and the development of the genre of the graphic novel has produced a number of important innovations in film, including such breakthrough efforts in visual art as The Crow (1994), and Sin City (2005). Films such as Road to Perdition (2002) and A History of Violence (2005) have provided interesting adaptations of noirish graphic novels that rely somewhat less on visual style to achieve their effects.

M. Keith Booker is Professor of English at the University of Arkansas. He is the author of numerous articles and books on modern literature, literary theory, television, and film including Monsters, Mushroom Clouds, and the Cold War (2001), Strange TV: Innovative Television Series from The Twilight Zone to The X-Files (2002), Science Fiction Television (2004), Alternate Americas: Science Fiction Film and American Culture (2006), Drawn to Television: Prime-Time Animation from The Flintstones to Family Guy (2006), From Box Office to Ballot Box: The American Political Film (2007), and Postmodern Hollywood (2007).