Meanings of the Medium: Perspectives on the Art of Television (Media and Society Series) (Hardcover) 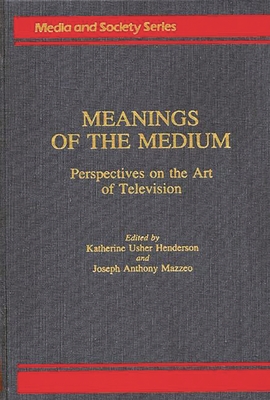 By K. Henderson
This Book Is Not Sold Online - Inquire In Store

The latest addition to the Media and Society Series, Meanings of the Medium takes a new approach to the study of the past, present, and future of television. Most of its authors are not media experts but literary critics, philosophers, rhetoricians, and historians. They use their unique skills to examine three interwoven themes: the origin and meaning of American attitudes toward television, the relationship between high art and television's popular art, and the relationship between particular kinds of programs and the audience's sensibilities. Stressing an aesthetic and historical approach, the volume directs itself to the reasons why people watch particular programs and what these patterns tell us about ourselves.

This volume is divided into three sections. First, Television and Society stresses the dynamic relationship between a particular genre and the sensibility of its audience. Television Programming as Art traces the subtle connections between High culture and examples of contemporary television programs. The development of American attitudes toward television is documented by media experts in the final section, Television and Its Critics.

KATHERINE USHER HENDERSON is Professor of English and Vice President for Academic Affairs at Dominican College of San Raphael. The author of Joan Didion, she has published extensively on women's studies and contemporary writers.JOSEPH ANTHONY MAZZEO is Avalon Foundation Professor Emeritus in the Humanities at Columbia University. He is the author of eight books including Varieties of Interpretation, Renaissance and Revolution: The Remaking of European Thought, The Design of Life: Major Themes in Biological Thought.