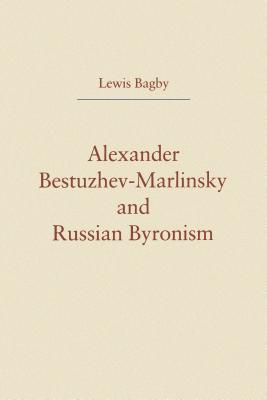 The most popular Russian prose fiction writer in the 1820s and 1830s, Alexander Bestuzhev (pseudonym Marlinsky) was also a literary critic, poet, military hero, and revolutionary. This study attempts to reestablish Bestuzhev's position in Russian cultural history while at the same time introducing a forgotten literary icon to a new audience.

Lewis Bagby places Bestuzhev within the fashionable trends of early European Romanticism and analyzes his Byronic literary persona intricately connected to his military career, the literary polemics of the day, fiction writing, and political activism. This approach permits a reading of Bestuzhev's literary persona from the perspective of carnival rebirth and heroic death, which are seen here as driving impulses behind Bestuzhev's life, his art, the Decembrist revolt, his popularity, and the subsequent disclaimer of his importance by later generations. Of central importance to Bagby's interpretation are the works of Mikhail Bakhtin, Ren Girard, and Yury Lotman as they touch on the traditions of the carnivalesque in the creation of art, personal identity, and political revolt.

Lewis Bagby is Professor Emeritus of Modern and Classical Languages at the University of Wyoming.