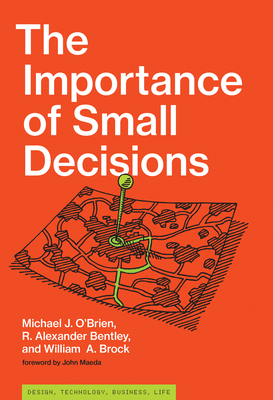 How people make decisions in an era of too much information and fake news.

Humans originally evolved in a world of few choices. Prehistoric, preindustrial, and predigital eras required fewer decisions than today's all-access, always-on world of too much information. Economists have largely discarded the idea that agents act rationally and the market follows suit. It seems that no matter how small or innocuous a decision might seem, there's almost no way to guess the effect it might have. The authors of The Importance of Small Decisions view decisions and their outcomes from a different perspective: as key elements in the evolution of culture. In this trailblazing book, they examine different kinds of decisions and map the outcomes, both short- and long-term. Drawing on this, they introduce a map of social behavior that captures the essential elements of human decision-making.

The authors look at the New England Patriots' decision in 2000 to draft an underachieving college quarterback named Tom Brady; they consider Warren Buffett's investment strategy; and they chart the “dancing landscape” of a college applicant's decision-making environment. Finally, they show that decisions can be ranked according to transparency of choice and social influence. When fake news seems indistinguishable from real news and when the internet offers a cacophony of voices, they warn, we can't afford to crowdsource our decisions.

Michael J. O'Brien is Provost and Professor of History at Texas A&M University–San Antonio and the coauthor of I'll Have What She's Having: Mapping Social Behavior and The Acceleration of Cultural Change: From Ancestors to Algorithms (both published by the MIT Press).

R. Alexander Bentley is Professor and Chair of the Department of Anthropology at the University of Tennessee and coauthor of I'll Have What She's Having: Mapping Social Behavior and The Acceleration of Cultural Change: From Ancestors to Algorithms (both published by the MIT Press).

An internationally recognized leader at the intersection of design and technology, John Maeda is Executive Vice President/Chief Experience Officer at Publicis Sapient. He was the 16th President of the Rhode Island School of Design (RISD). He is the author of Design by Numbers, The Laws of Simplicity, and Redesigning Leadership, all published by The MIT Press.

An enticing digest, with shades of (and references to) Daniel Kahneman's Thinking Fast and Slow and James Surowiecki's The Wisdom of Crowds.

A neat little primer on an evolutionary approach to decision theory.

“Why worry about the underlying causes of global warming when we can see what tens of millions of our closest friends think?” ask the authors, building to a fine, satirical climax.... There is much fun to be had reading the garrulous banter of these three extremely smart academics.