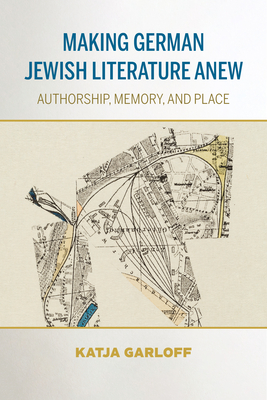 In Making German Jewish Literature Anew, Katja Garloff traces the emergence of a new Jewish literature in Germany and Austria from 1990 to the present. The rise of new generations of authors who identify as both German and Jewish, and who often sustain additional affiliations with places such as France, Russia, or Israel, affords a unique opportunity to analyze the foundational moments of diasporic literature. Making German Jewish Literature Anew is structured around a series of founding gestures: performing authorship, remaking memory, and claiming places. Garloff contends that these founding gestures are literary strategies that reestablish the very possibility of a German Jewish literature several decades after the Holocaust.

Making German Jewish Literature Anew offers fresh interpretations of second-generation authors such as Maxim Biller, Doron Rabinovici, and Barbara Honigmann as well as of third-generation authors, many of whom come from Eastern European and/or mixed-religion backgrounds. These more recent writers include Benjamin Stein, Lena Gorelik, and Katja Petrowskaja. Throughout the book, Garloff asks what exactly marks a given text as Jewish--the author's identity, intended audience, thematic concerns, or stylistic choices--and reflects on existing definitions of Jewish literature.

Katja Garloff is Professor of German and Humanities at Reed College. She is author of Mixed Feelings: Tropes of Love in German Jewish Culture and Words from Abroad: Trauma and Displacement in Postwar German Jewish Writers.