Has the West Lost It?: A Provocation (Hardcover) 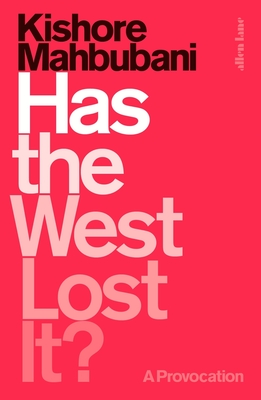 The West's centuries-old status as the center of global wealth and power is coming to an end. As the new powers—China and India from Asia and others from Africa and Latin America—rise to the top of the world's pecking order, how should the West react? Kishore Mahbubani argues passionately and provocatively that the West can no longer impose its power and ideals on the world at large, and—paradoxically—that only by admitting its decline can the West set itself up for strategic success in the long term. Mahbubani examines the myths and self-delusions of Western power with an outsider's critical eye, and the shocking freshness of his geopolitical analysis will give all Westerners and political thinkers pause for thought.

Kishore Mahbubani is a Professor in the Practice of Public Policy at the National University of Singapore. His articles have appeared in Financial Times, Time, Newsweek and The New York Times. He is also the author of Can Asians Think?, The New Asian Hemisphere, and The Great Convergence.

"Mahbubani might well be the most intelligent, friendly and doggedly persistent critic of the West. In this brief book, he delivers some of his trademark analysis and pungent observations. We should all think of it as the cold shower that is urgently needed to revive the West." —Fareed Zakaria, author, The Post-American World

"Mahbubani offers a penetrating analysis of the West's predicament. His optimistic view is a welcome antidote to so much prevailing wisdom. It deserves to be widely read and debated." —Lawrence H. Summers, former Chief Economist of the World Bank

"As Asia steadily advances to the centre of the world's stage, has the West properly noticed that huge change? Can it amend itself intelligently, and without as simple knee-jerk reaction? Can the United States in particular come to grips with global transformations? These questions are at the center of Kishore Mahbubani's pointed and provocative new discourse, based upon his long acquaintance with both East and West. It's a powerful, disputatious book, and provides much meat for all readers who will want to dispute it. It's not comfortable reading, and it wasn't meant to be." —Paul Kennedy, Director of International Security Studies and Professor of History, Yale University

"Mahbubani's depiction of Western thought leaders as not willing to read the writing on the wall reminds me of the confident mandarins of late Qing China who dismissed the possibility of a world emerging that could challenge their superior system. His call for action suggests that, if the West takes heed, they could escape the Qing mandarins' fate." —Wang Gungwu, Professor, National University of Singapore -

"Mahbubani brings unrivaled experience and insight into strategizing where the West goes from here. A book that truly speaks to our tumultuous times." —Ian Bremmer, President, Eurasia Group