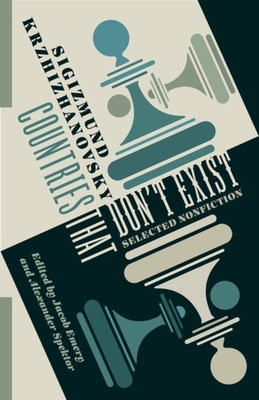 By Jacob Emery (Editor), Alexander Spektor (Editor)
This Book Is Not Sold Online - Inquire In Store

Almost unknown during his lifetime, Sigizmund Krzhizhanovsky is now hailed as a master of Russian prose. His short stories and novels, unpublishable under Stalinism but rediscovered long after his death, have drawn comparisons to the works of Jorge Luis Borges for their distinctive blend of metafictional play and philosophical thought experiment. Like Borges, Krzhizhanovsky also wrote dazzlingly unconventional essayistic pieces as a slippery extension of his fictional project. Countries That Don't Exist showcases a selection of Krzhizhanovsky's exceptional nonfiction, which spans a dizzying range of genres and voices. Playful fantasies dwelling in the borderlands between essay and fable, metaphysical conversations and probing literary criticism, philosophical essays and wartime memoirs--in all these modes Krzhizhanovsky's writing bristles with idiosyncratic erudition and a starkly original vision of literary creation. Krzhizhanovsky comes across as a strange voice from another past, at once utterly novel yet unmistakably belonging to the high modernist 1920s and 1930s. Taken together, these works present to the English-speaking world a fresh aspect of a newly canonized author. Countries That Don't Exist also features critical commentary that places these texts in the context of Krzhizhanovsky's other writings and illuminates their relationship to the philosophical and aesthetic ferment of Russian and European modernism.

Sigizmund Krzhizhanovsky (1887-1950) was born in Kiev and moved to Moscow shortly after the revolution, where he joined the experimental art and theater worlds. Though known in literary circles, he published little during his lifetime, as his phantasmagoric and metafictional texts met the disapproval of Soviet censors. His books in English translation include Memories of the Future, The Letter Killers Club, and The Return of Munchausen. Jacob Emery is associate professor in the Department of Slavic and East European Languages and Cultures at Indiana University. Alex Spektor is associate professor of Russian at the University of Georgia.