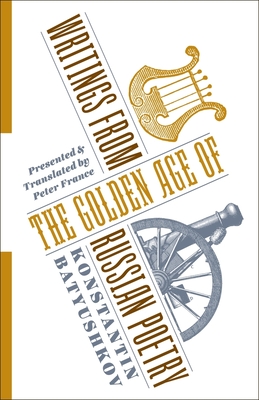 By Konstantin Batyushkov, Peter France (Translator)
This Book Is Not Sold Online - Inquire In Store

Konstantin Batyushkov was one of the great poets of the Golden Age of Russian literature in the early nineteenth century. His verses, famous for their musicality, earned him the admiration of Alexander Pushkin and generations of Russian poets to come. In Writings from the Golden Age of Russian Poetry, Peter France interweaves Batyushkov's life and writings, presenting masterful new translations of his work with the compelling story of Batyushkov's career as a soldier, diplomat, and poet and his tragic decline into mental illness at the age of thirty-four. Little known among non-Russian readers, Batyushkov left a varied body of writing, both in verse and in prose, as well as memorable letters to friends. France nests a substantial selection of his sprightly epistles on love, friendship, and social life, his often tragic elegies, and extracts from his essays and letters within episodes of his remarkable life--particularly appropriate for a poet whose motto was "write as you live, and live as you write." Batyushkov's writing reflects the transition from the urbane sociability of the Enlightenment to the rebellious sensibility of Pushkin and Lermontov; it spans the Napoleonic Wars and the rapid social and literary change from Catherine the Great to Nicholas I. Presenting Batyushkov's poetry of feeling and wit alongside his troubled life, Writings from the Golden Age of Russian Poetry makes his verse accessible to English-speaking readers in a necessary exploration of this transitional moment for Russian literature.

Konstantin Batyushkov (1787-1855) was a celebrated Russian poet and essayist. He served in three campaigns of the Napoleonic wars and was posted to Naples on diplomatic service before succumbing to incurable mental illness in 1822. Peter France is honorary fellow and professor emeritus at the University of Edinburgh. He has translated French and Russian prose texts as well as the works of many Russian poets, most recently Lermontov, Baratynsky, Mandelstam, and Aygi.