Pleasant Good Evening - A Memoir: My 30 Wild and Turbulent Years of Sportstalk (Paperback) 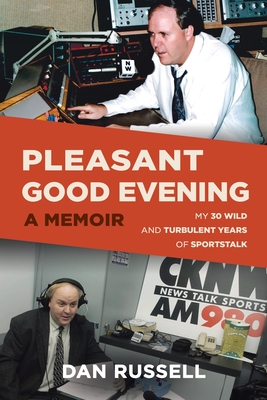 Dan Russell's Sportstalk was appointment-listening for tens of thousands of B.C. sports fans over its three-decade run. What began in 1984 as a simple 50-minute filler would grow into the longest-running and most-listened to show of its kind in Canada.

Russell created and solo-hosted the weekday-evening shows as Sportstalk became the gathering spot for Vancouver Canucks fans, highlighted by memorable marathon coverage of the 1994 and 2011 Stanley Cup finals.

Bobby Orr, Michael Jordan, Wayne Gretzky, George Foreman, Vin Scully and Pel were among Russell's 25,000 interview subjects. But it was Brian Burke's weekly segment that created many of Sportstalk's greatest moments; that is, until their relationship went drastically sour. Russell also fielded more than 200,000 calls, including many from the renowned Paul Lafleur, a.k.a. "The Pauser," the most famous caller in Vancouver radio history.

A trailblazer, Russell started long before the arrival of 24/7 sports stations, inventing a format that's now commonly duplicated - all while stickhandling through the neverending politics of the radio business.