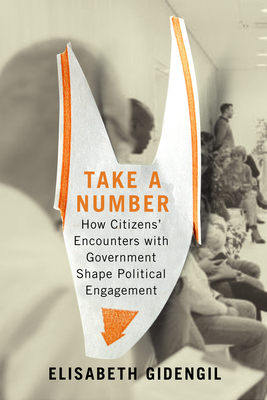 By Elisabeth Gidengil
$37.95
Unavailable, Out of Stock, or Out of Print

Inspired by American studies of the impact of government programs on clients' political activity, Take a Number breaks new ground by investigating the lessons that people draw from their experiences with government bureaucracies, reaching very different conclusions about the effects of program participation in Canada. People's experiences with service providers matter. Far from being de-politicizing, negative experiences can be empowering, stimulating greater political interest and more political activity. In contrast to the findings of some American studies, there is no evidence that these encounters leave claimants in Canada with the sense that they are neither legitimate nor effective actors in the public sphere. Rather than discouraging participation in politics, being a recipient of means-tested benefits likewise seems to be politically mobilizing. Based on extensive survey data, Take a Number casts new light on the problem of non-take-up of social benefits. Elisabeth Gidengil reveals that those who are most likely to benefit are often unaware of government programs. The more demanding and intrusive the claiming process, the more likely claimants are to find it difficult to access the program. These experiences with government programs prove to have larger implications for users' confidence in institutions and their satisfaction with democracy. A wide-ranging study of the politicizing effects of social program participation, Take a Number introduces a compelling new dimension to our understanding of why some citizens are politically active while others remain quiescent.

Elisabeth Gidengil is Hiram Mills Professor in the Department of Political Science at McGill University.

"With its careful discussion of research methodology, the limits of the findings, and potential avenues for future research, Take a Number is written for researchers and academics. But it has opened up a neglected area of research important to all of us—and at just the right time. How we organize programs matters. The details matter. Public administration and how public servants deliver services matter. They matter not just for efficiency, which has been the driving objective in recent times of austerity, but for fairness." Literary Review of Canada

"Take a Number takes a novel approach to studying the impact citizen interaction with government has upon political attitudes and behaviours, convincingly demonstrating the important effects such interactions can have and exploring questions that have yet to be seriously considered in the Canadian context." Michael McGregor, Ryerson University