The Birth of the Republic, 1763-89, Fourth Edition (The Chicago History of American Civilization) (Paperback) 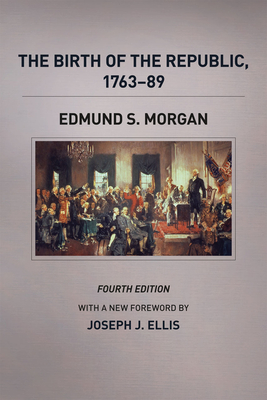 In The Birth of the Republic, 1763–89, Edmund S. Morgan shows how the challenge of British taxation started Americans on a search for constitutional principles to protect their freedom, and eventually led to the Revolution. By demonstrating that the founding fathers’ political philosophy was not grounded in theory, but rather grew out of their own immediate needs, Morgan paints a vivid portrait of how the founders’ own experiences shaped their passionate convictions, and these in turn were incorporated into the Constitution and other governmental documents. The Birth of the Republic is the classic account of the beginnings of the American government, and in this fourth edition the original text is supplemented with a new foreword by Joseph J. Ellis and a historiographic essay by Rosemarie Zagarri.

Edmund S. Morgan is Sterling Professor of History Emeritus at Yale University and past president of the Organization of American Historians. William T. Hagan (1918–2011) was professor emeritus of history at the University of Oklahoma and the author of The Sac and Fox Indians, Indian Police and Judges, United States-Comanche Relations, and The Indian Rights Association. John Hope Franklin (1915–2009) was the James B. Duke Professor of History Emeritus at Duke University. He is the author of many books, including Mirror to America: The Autobiography of John Hope Franklin and Racial Inequality in America.

“No better brief chronological introduction to the period can be found than Edmund S. Morgan’s The Birth of the Republic: 1763–89.”

“The author concisely and clearly covers the major topics, and he offers a well-organized and attractively written survey. . . . The Birth of the Republic is particularly to be praised because of the sensible and judicious views offered by Morgan. He is unfair neither to Britain nor to the colonies.”

“Apart from its uplifting argument, part of the appeal of The Birth of the Republic is its prose style, which is blissfully bereft of academic jargon, sophisticated but simple in a way that scholarly specialists find impressive and ordinary readers find comprehensible. Morgan makes the story he is telling take precedence over the note cards he has assembled. He regards narrative as the highest form of analysis, and he has a natural gift for telling a story, silently digesting mountains of historical evidence to produce the distilled essence of the issue at stake.”

— Joseph J. Ellis, from the foreword