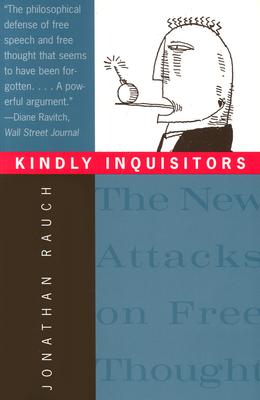 Tracing attacks on free speech from Plato's Republic to America's campuses and newsrooms, Jonathan Rauch provides an engaging and provocative attack on those who would limit free thought by restricting free speech. Rauch explores how the system for producing knowledge works in a liberal society, and why it has now become the object of a powerful ideological attack. Moving beyond the First Amendment, he defends the morality, rather than the legality, of an intellectual regime that relies on unfettered and often hurtful criticism. "Kindly Inquisitors" is a refreshing and vibrant essay, casting a provocative light on the raging debates over political correctness and multiculturalism.
"Fiercely argued. . . . What sets his study apart is his attempt to situate recent developments in a long-range historical perspective and to defend the system of free intellectual inquiry as a socially productive method of channeling prejudice." Michiko Kakutani, "New York Times"
"Like no other, this book restates the core of our freedom and demonstrates how great, and disregarded, the peril to that freedom has become." Joseph Coates, "Chicago Tribune"
"The philosophical defense of free speech and free thought that seems to have been forgotten. . . . A powerful argument." Diane Ravitch, "Wall Street Journal.