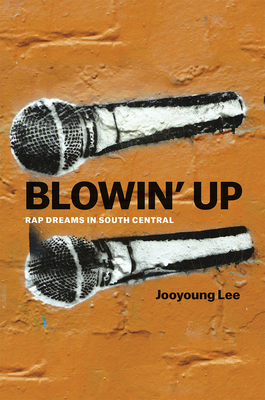 Dr. Dre. Snoop Dogg. Ice Cube. Some of the biggest stars in hip hop made their careers in Los Angeles. And today there is a new generation of young, mostly black, men busting out rhymes and hoping to one day find themselves “blowin’ up”—getting signed to a record label and becoming famous. Many of these aspiring rappers get their start in Leimart Park, home to the legendary hip hop open-mic workshop Project Blowed. In Blowin’ Up, Jooyoung Lee takes us deep inside Project Blowed and the surrounding music industry, offering an unparalleled look at hip hop in the making.

While most books on rap are written from the perspective of listeners and the market, Blowin’ Up looks specifically at the creative side of rappers. As Lee shows, learning how to rap involves a great deal of discipline, and it takes practice to acquire the necessary skills to put on a good show. Along with Lee—who is himself a pop-locker—we watch as the rappers at Project Blowed learn the basics, from how to hold a microphone to how to control their breath amid all those words. And we meet rappers like E. Crimsin, Nocando, VerBS, and Flawliss as they freestyle and battle with each other. For the men at Project Blowed, hip hop offers a creative alternative to the gang lifestyle, substituting verbal competition for physical violence, and provides an outlet for setting goals and working toward them.

Engagingly descriptive and chock-full of entertaining personalities and real-life vignettes, Blowin’ Up not only delivers a behind-the-scenes view of the underground world of hip hop, but also makes a strong case for supporting the creative aspirations of young, urban, black men, who are often growing up in the shadow of gang violence and dead-end jobs.

Jooyoung Lee is assistant professor in the Department of Sociology at the University of Toronto.

“Blowin’ Up: Rap Dreams in South Central represents a jump through the keyhole into the world of hip-hop as it is lived by some of the art form’s most dedicated practitioners. . . . Necessary and important, Blowin’ Up provides an intimate look at this essential art form.”

“A pleasure to read while being theoretically rich, methodologically innovative, and socially important. . .Blowin’ Up is original in analyzing the creative process in small groups and is cutting edge in demonstrating how fun fosters
group cohesion. . . .An important book that will be valued and praised by those concerned with theory development and those interested in propelling social change. It is broadly appealing, speaking directly to ethnographers but also
to those interested in creative work and industries, small groups, artistic careers, youth, crime, and the sociology of emotions.”
— Contemporary Sociology

“Blowin’ Up goes deep, and it puts you there among the everyday lives of youthful rap artists, whose most coveted prize is to ‘blow up,' or to become famous. Through its fresh and immediate vocabulary, Blowin’ Up shows and tells the realities of the street and shines a brilliant new light on the darker edges of the city—it is absolutely essential reading that will take its place in the growing body of path-breaking urban ethnography.”
— Elijah Anderson, author of Code of the Street

“In Blowin' Up, Lee does an amazing job of illuminating the lives of black men in one of Los Angeles’s underground rap scenes. His engaging, accessible, and descriptive book takes us vividly inside this world, and it is one of a kind in terms of looking at the careers and lives of underground rappers.”

“Lee tells what it's like ‘being down’ (AKA culturally competent) in the underground of amateur street rapping and the narrow channel towards commercial success. Along the way, he provides a fresh and upbeat view of how rapping provides a locally respected alternative to violent gangs. His book reveals the micro-skills that make or break a rapper in front of the street group and how the ritualized violence of rap battles acts as a way to control and escape real violence—most of the time.”

“Blowin’ Up offers original and compelling insights into the complexities of hip-hop as a lived practice. Lee deftly shows how young Black males use hip-hop culture as a means of reimagining individual and social possibilities against the backdrop of local violence, inaccessible labor markets, and an increasingly repressive State. The book also offers fresh insights into the processes by which individuals learn, share, and nurture various forms of hip-hop cultural production. This book, which is ethnographically rich and conceptually rigorous, makes a significant and sorely needed intervention into both hip-hop studies and urban ethnography.”
— Marc Lamont Hill, author of Beats, Rhymes, And Classroom Life: Hip-Hop Pedagogy and the Politics of Identity

“Lee does a great justice to the history of not just hip-hop but music in this city. Project Blowed is L.A.’s 1520 Sedgwick Avenue. It is directly responsible for the emergence of Art Rap. Without it, Low End Theory and its beat scene might have never come to be. . . . Lee’s work here is already seminal in that historical chain and in giving Project Blowed well-earned props.”

— Passion of the Weiss