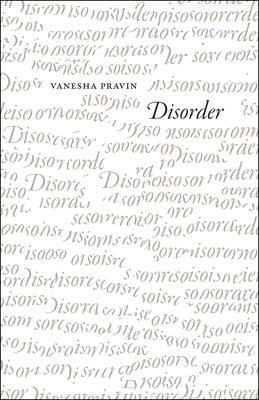 Midsummer. Finally, you are used to disappointment.
A baby touches phlox. Many failures, many botched attempts,

A little success in unexpected forms. This is how the rest will go:
The gravel raked, bricks ashen, bees fattened–honey not for babes.

All at once, a rustling, whole trees in shudder, clouds pulled
Westward. You are neither here nor there, neither right nor

Wrong. The world is indifferent, tired of your insistence.
Garter snakes swallow frogs. The earthworms coil.

On your fingers, the residue of red pistils. What have you made?
What have you kept alive? Green, a secret, occult,

A remarkable first book, Disorder tells the story, by turns poignant and outrageous, of a family’s dislocation over four continents during the course of a hundred years. In short lyrics and longer narrative poems, Vanesha Pravin takes readers on a kaleidoscopic trek, from Bombay to Uganda, from England to Massachusetts and North Carolina, tracing the path of familial love, obsession, and the passage of time as filtered through the perceptions of family members and a host of supporting characters, including ubiquitous paparazzi, amorous vicars, and a dubious polygamist. We experience throughout a speaker forged by a deep awareness of intergenerational, multicontinental consciousness. At once global and personal, crossing ethnic, linguistic, and national boundaries in ways that few books of poetry do, Disorder bristles with quiet authority backed by a skeptical intelligence.

Vanesha Pravin teaches at the University of California, Merced.

"A central challenge for American art has been the confluence of immigrant histories. Rising above conventional approaches to that material, urgent and severe, Vanesha Pravin’s Disorder attains a global and historical perspective uniquely personal yet wide-ranging."
— Robert Pinsky, author of Gulf Music

"Vanesha Pravin’s Disorder is a dazzling debut. These elegant and spare reckonings with both personal and family history resonate with lyric urgency as they arise in the wake of Pravin’s wistful--at times quietly sober--reflections. The narratives of Disorder overlap and tremble in their telling, just as the limbs of this family tree seem bent almost to the point of breaking, even as they reach for the future. This superb collection is a timely meditation on the vagaries and varietals of mixed cultures, and Vanesha Pravin’s poetry is an ever-turning, kaleidoscopic lens."
— David St. John, author of The Face: A Novella in Verse

"Disorder roots itself in the idea of uprootedness. The poems’ many subtitled names and dates point to the rearrangement or disorder of interwoven chronologies: the poet's story—her childhood and itinerate adulthood—and her family's meandering and troubled past. If 'survival depends on stories,' the indelible characters Pravin recreates are, all of them, alive. Pravin's masterful sense of distance and quiet intensity create a sense of suspension, so that the emotions of even the most intimate lyrics brim just beneath the lines. The poems are remarkable in their capacity to be at once intricate and spare. The book's adrift, often solitary, central speaker ponders her seemingly inherited displacement, and the book is rich with other bequests: in different poems, that speaker and her great-grandmother are 'resigned' and 'inured,' respectively, 'to the unexpected.' Culminating in the forceful and unforgettable penultimate poem, 'Belief Revision,' Disorder is an astonishing debut, unexpected in its maturity, understatement and resonance."
— Maggie Dietz, author of Perennial Fall