About the Beginning of the Hermeneutics of the Self: Lectures at Dartmouth College, 1980 (The Chicago Foucault Project) (Hardcover) 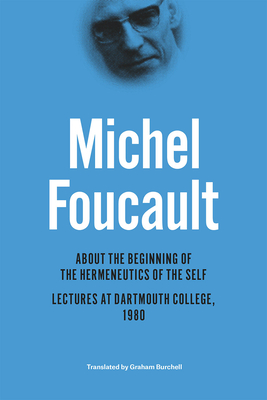 In 1980, Michel Foucault began a vast project of research on the relationship between subjectivity and truth, an examination of conscience, confession, and truth-telling that would become a crucial feature of his life-long work on the relationship between knowledge, power, and the self. The lectures published here offer one of the clearest pathways into this project, contrasting Greco-Roman techniques of the self with those of early Christian monastic culture in order to uncover, in the latter, the historical origin of many of the features that still characterize the modern subject. They are accompanied by a public discussion and debate as well as by an interview with Michael Bess, all of which took place at the University of California, Berkeley, where Foucault delivered an earlier and slightly different version of these lectures.

Foucault analyzes the practices of self-examination and confession in Greco-Roman antiquity and in the first centuries of Christianity in order to highlight a radical transformation from the ancient Delphic principle of “know thyself” to the monastic precept of “confess all of your thoughts to your spiritual guide.” His aim in doing so is to retrace the genealogy of the modern subject, which is inextricably tied to the emergence of the “hermeneutics of the self”—the necessity to explore one’s own thoughts and feelings and to confess them to a spiritual director—in early Christianity. According to Foucault, since some features of this Christian hermeneutics of the subject still determine our contemporary “gnoseologic” self, then the genealogy of the modern subject is both an ethical and a political enterprise, aiming to show that the “self” is nothing but the historical correlate of a series of technologies built into our history. Thus, from Foucault’s perspective, our main problem today is not to discover what “the self” is, but to try to analyze and change these technologies in order to change its form.

Michel Foucault (1926-1984) was a French philosopher and historian who held the Chair of the History of Systems of Thought at the Collège de France. His many books in English include The Order of Things, Discipline and Punish, The History of Sexuality, and “Discourse and Truth” and “Parrēsia,” the latter also published by the University of Chicago Press.

Henri-Paul Fruchaud is an editor of Michel Foucault’s posthumous works.

Daniele Lorenzini is associate professor of philosophy at the University of Pennsylvania.

Daniele Lorenzini is associate professor of philosophy at the University of Pennsylvania.

“These lectures certainly indicate the continuities in Foucault’s thought from the genealogical analyses of the 1970s, principally Discipline and Punish and The History of Sexuality, with his later studies associated with the care of the self. The publishers of this volume have provided a fluid and carefully annotated transcription of four texts that deepen our understanding of Foucault’s idiosyncratic use of ancient ethics and what he thought we might learn from it.”

“Provides readers with a concise statement of the stakes of Foucault’s later thought.”

What happened in the years between the publication in 1976 of La Volonté de savoir (The Will to Know) and Michel Foucault’s death in 1984? ...There exists a confusing mass of interviews, lectures, introductions, short essays, round table forums, and journalistic forays. A new edition by Henri-Paul Fruchard and Daniele Lorenzini, About the Beginning
of the Hermeneutics of the Self
, sheds further light on this period with two previously unpublished pieces from 1980… The difficulty of interpreting Foucault and asserting his rightful place in the philosophical canon endures. Pinning down loose butterflies in the manner of Fruchard and Lorenzini certainly changes the look of the whole collection. Getting the corpus out of the museum and into live forums of historical-philosophical inquiry is a pressing task.