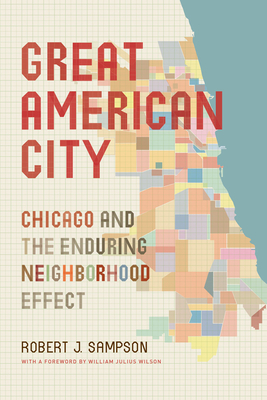 For over fifty years numerous public intellectuals and social theorists have insisted that community is dead. Some would have us believe that we act solely as individuals choosing our own fates regardless of our surroundings, while other theories place us at the mercy of global forces beyond our control. These two perspectives dominate contemporary views of society, but by rejecting the importance of place they are both deeply flawed. Based on one of the most ambitious studies in the history of social science, Great American City argues that communities still matter because life is decisively shaped by where you live. To demonstrate the powerfully enduring impact of place, Robert J. Sampson presents here the fruits of over a decade’s research in Chicago combined with his own unique personal observations about life in the city, from Cabrini Green to Trump Tower and Millennium Park to the Robert Taylor Homes. He discovers that neighborhoods influence a remarkably wide variety of social phenomena, including crime, health, civic engagement, home foreclosures, teen births, altruism, leadership networks, and immigration. Even national crises cannot halt the impact of place, Sampson finds, as he analyzes the consequences of the Great Recession and its aftermath, bringing his magisterial study up to the fall of 2010. Following in the influential tradition of the Chicago School of urban studies but updated for the twenty-first century, Great American City is at once a landmark research project, a commanding argument for a new theory of social life, and the story of an iconic city.

Robert J. Sampson is the Henry Ford II Professor of the Social Sciences at Harvard University and coauthor of Crime in the Making: Pathways and Turning Points through Life and Shared Beginnings, Divergent Lives: Delinquent Boys to Age 70.

“A revolution is under way in social science, and Robert Sampson’s Great American City offers an excellent exemplar of the new turn. . . The book convincingly demonstrates that individual outcomes are not the simple result of atomistic choices but reflect highly contingent decisions that unfold within spatially grounded social structures and institutionalized processes that limit options and reproduce existing inequalities between individuals, households, and neighborhoods. By situating human beings within a well-defined social system, Sampson contextualizes individual actors and their decisions socially, spatially, and institutionally.”

“Great American City takes us from the grand theories conjured by its commanding title, down to the iconic street corner to see what it really means when windows are broken. This is a book of big, challenging, provocative, and inspiring ideas, as well as of meticulous, rigorous, and exhaustive data. Sampson has truly shown his shoulders big enough to be counted among Chicago’s most venerated social observers, as well as the most astute theorists of place.”

“After Great American City we will never be able to view cities in the same way again. This is one of those rare books that deeply affect how we think about the world. It teaches us afresh how the neighborhoods we live in affect us and the people around us. And there are also immense policy implications. Robert Sampson shows definitively how the fate of the urban poor is so very dependent on the communities in which they live.”

“Robert J. Sampson's important new book challenges prevailing notions of community decline. Sampson argues that our communities continue to matter a great deal and that our lives are powerfully shaped by where we live. . . . [With] lots of empirical detail and theoretically driven, Great American City shows the striking persistence of poverty across its neighborhoods from 1960 to 2000."

“It’s good reading which is a rare compliment to a sociologist. . . A very important book.”

"Robert J. Sampson's very readable research findings are theoretically rich, cutting-edge in urban research, and should be inspirational for future researchers in urban sociology. . . . A definite must read for anyone interested in groundbreaking upper-level urban sociology. Essential."

"Rob Sampson has written a great book. It is a must-read for almost all sociologists and demographers, and especially important for urbanists. Though I have written numerous book reviews and read countless others, this essay is by far the hardest one I've been asked to do. It is hard for two reasons: first, there is so much excellent material in Great American City to write about that it is hard to know where to begin; and second, the book is so good it is difficult to keep from being overly effusive in praising it."

“Great American City is the rare example of a highly anticipated book by a leading scholar that exceeds expectations. Combining Robert Sampson’s observations with major data collection on neighborhoods in Chicago and original analytic methods, the result is a compelling argument for the importance of place. Neither a purely theoretical nor empirical study, Great American City is an impressive model of how theory, data collection, and analytic methods can be combined to the benefit of all three endeavors. . . . Among the most important works in sociology in recent decades. . . . Through its publication, Sampson establishes himself as our modern Robert Park, and Great American City can be justly regarded as the most sophisticated Chicago School study ever produced.”
— Lincoln Quillian

“There is a scene in the film Crocodile Dundee in which a young hoodlum threatens the titular protagonist with a knife. In response to his girlfriend’s tremulous observation of this fact, Dundee, unfazed, brandishes a comically much larger knife and quips sardonically, “that’s not a knife . . . THIS is a knife.” The hood turns tail, Dundee returns the knife to its sheath, and the film chugs merrily on. I was reminded of this scene several times while reading Robert J. Sampson’s Great American City. With respect to social scientists past, present, and future: THIS is a book.”
— Jeffrey M. Timberlake

“Great American City definitely is one of the best bang-for-the-buck values in recent years. It is worth the very small investment to own this magnum opus regardless of the research site.”
— Robert J. Bursik, Jr.

“Following in the influential tradition of the Chicago School of urban studies, but updating it for the twenty-first century, [Sampson] argues that communities do still matter because life is decisively shaped by where we live. Neighbourhoods influence a wide variety of phenomena including teen births, altruism and crime. Not even national crisis can destroy the enduring impact of place.”
— BBC Radio 4's "Thinking Allowed"