The United States of Excess: Gluttony and the Dark Side of American Exceptionalism (Hardcover) 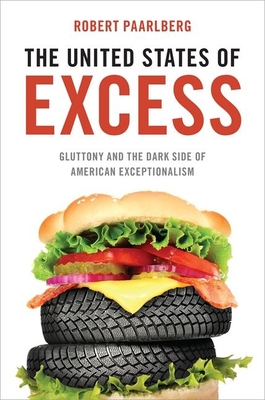 Compared to other wealthy countries, America stands out as a gluttonous over-consumer of both food and fuel. The United States boasts an obesity prevalence double the industrial world average, and per capita carbon emissions twice the average for Europe. Still worse, the policy steps taken by
America in response to obesity and climate change have so far been the weakest in the industrial world. These aspects of America's exceptionalism are nothing to be proud of. Is it possible that America is hard-wired to consume too much food and fuel? Unfortunately, yes, says Robert Paarlberg in The United States of Excess. America's excess is driven in each case by its distinct endowment of material and demographic resources, its unusually weak national political
institutions, and a unique political culture that celebrates both individual freedoms over social responsibility, and free markets over governmental authority. America's over-consumption is shown to be over-determined. Because of these powerful underlying circumstances, America's strongest policy response, both to climate change and obesity, will be adaptation rather than mitigation. As the damaging consequences of climate change become manifest, America will not impose adequate measures to reduce fossil fuel
consumption, attempting instead to protect itself from storms and sea-level rise through costly infrastructure upgrades. In response to the damaging health consequences of obesity, America will opt for medical interventions and physical accommodations, rather than the policy measures that would be
needed to induce better diets or more exercise. These adaptation responses will generate serious equity problems, both at home and abroad. Responding to obesity with medical interventions will fall short for those in America most prone to obesity - racial minorities and the poor - since these groups have never enjoyed adequate access to quality
health care. Responding to climate change by building more resilient infrastructures at home, while allowing atmospheric concentrations of CO2 to continue their increase, will impose greater climate disruption on poor tropical countries, which are far less capable of self-protection. Awareness of
these inequities must be the starting point toward altering America's current path.

Robert Paarlberg is a Professor of Political Science at Wellesley College and Adjunct Professor of Public Policy at the Harvard Kennedy School. He has been a member of the Board of Agriculture and Natural Resources at the National Research Council and a consultant to the Bill and Melinda GatesFoundation, the United States Agency for International Development, the International Food Policy Research Institute, and the Food and Agricultural Organization of the United Nations.