As If an Enemy's Country: The British Occupation of Boston and the Origins of Revolution (Pivotal Moments in American History (Oxford)) (Paperback) 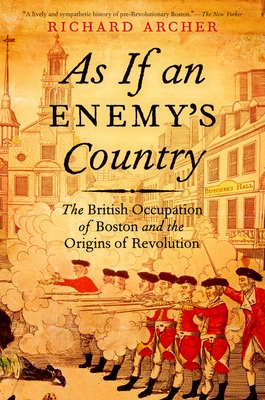 In the dramatic period leading to the American Revolution, no event did more to foment patriotic sentiment among colonists than the armed occupation of Boston by British soldiers. As If an Enemy's Country is Richard Archer's gripping narrative of those critical months between October 1, 1768 and the winter of 1770 when Boston was an occupied town. Bringing colonial Boston to life, Archer moves between the governor's mansion and cobble-stoned back-alleys as he traces the origins of the colonists' conflict with Britain. He reveals the maneuvering of colonial political leaders such as Governor Francis Bernard, Lieutenant Governor Thomas Hutchinson, and James Otis Jr. as they responded to London's new policies, and he evokes the outrage many Bostonians felt toward Parliament and its local representatives. Equally important, Archer captures the popular mobilization under the leadership of John Hancock and Samuel Adams that met the oppressive imperial measures--most notably the Sugar Act and the Stamp Act--with demonstrations, Liberty Trees, violence, and non-importation agreements. When the British government responded with the decision to garrison Boston with troops, it was a deeply felt affront to the local population. Almost immediately, tempers flared and violent conflicts broke out. Archer's tale culminates in the swirling tragedy of the Boston Massacre and its aftermath, including the trial of the British troops involved--and sets the stage for what was to follow.

Richard Archer is Professor of History Emeritus at Whittier College. He is the author of Fissures in the Rock: New England in the Seventeenth Century.