The World According to Kant: Appearances and Things in Themselves in Critical Idealism (Hardcover) 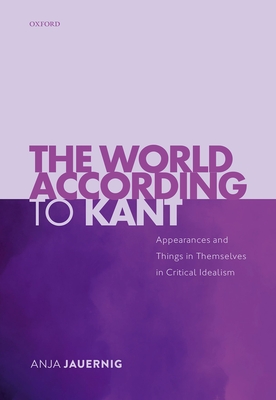 The world, according to Kant, is made up of two levels of reality: the transcendental and the empirical. The transcendental level is a mind-independent level at which things in themselves exist. The empirical level is a fully mind-dependent level at which appearances exist, which are intentional objects of experience. The distinction between appearances and things in themselves lies at the heart of Kant's critical philosophy and has been the focus of fierce debate among scholars for over two hundred years. Anja Jauernig offers this interpretation of Kant's critical idealism as an ontological position, which comprises transcendental idealism, empirical realism, and a number of other basic ontological theses, as developed in the Critique of Pure Reason and associated texts. In this interpretation Kant is a genuine idealist about empirical objects, empirical minds, and space and time. Yet in contrast to other intentional objects, appearances genuinely exist, which is due to both the special character of experience compared to other kinds of representations such as illusions or dreams, and to the grounding of appearances in things themselves. This is why Kant can also be considered a genuine realist about empirical objects, empirical minds, and space and time. This book spells out Kant's case for critical idealism thus understood, pinpoints the differences between critical idealism and ordinary idealism, and clarifies the relation between Kant's conception of things in themselves and the conception of things in themselves by other philosophers, in particular Kant's Leibniz-Wolffian predecessors.