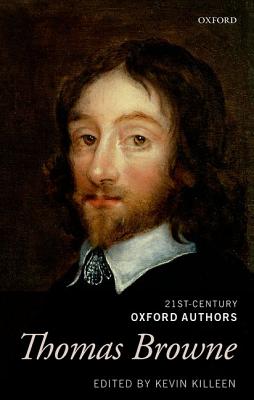 This volume in the 21st Century Oxford Authors series offers students and readers an authoritative, comprehensive selection of the work of Sir Thomas Browne (1605-1682). Accompanied by full scholarly apparatus, the edition demonstrates the breadth of the author of some of the most brilliant and delirious prose in English Literature. Lauded by writers ranging from Coleridge to Virginia Woolf, from Borges to W.G. Sebald, Browne's distinct style and the musicality of his phrasing have long been seen as a pinnacle of early modern prose. However, it is Browne's range of subject matter that makes him truly distinct. His writings include the hauntingly meditative Urn-Burial, and the elaborate The Garden of Cyrus, a work that borders on a madness of infinite pattern. Religio Medici, probably Browne's most famous work, is at once autobiography, intricate religious-scientific paradox, and a monument of tolerance in the era of the English civil war. This volume also includes his Pseudodoxia Epidemica, an encyclopaedia of error which contains within its vast remit the entire intellectual landscape of the seventeenth century-its science, its natural history, its painting, its history, its geography and its biblical oddities. The volume enables students to experience the ways in which Browne brings his lucid, baroque and stylish prose to bear across this range of diverse material, together with a carefully poised wit. This volume contains almost all of the author's work that was published in his lifetime, as well as a selection of writings published after his death. Explanatory notes and commentary are included, to enhance the study, understanding, and enjoyment of these works, and the edition includes an Introduction to the life and works of Browne.

Kevin Killeen, Lecturer in Renaissance Literature, University of York Kevin Killeen is Lecturer in English Literature at the University of York. He has written extensively on Thomas Browne and the intellectual culture of the seventeenth century, as well as the history of science and religion. He writes also on the politics of early modern England and its use of the Bible in thinking about political questions. Among his books is the prize winning Biblical Scholarship, Science and Politics in Early Modern Culture: Thomas Browne and The Thorny Place of Knowledge (2009).