Reassembling Social Security: A Survey of Pensions and Health Care Reforms in Latin America Published in Association with the Pan-American Health Or (Hardcover) 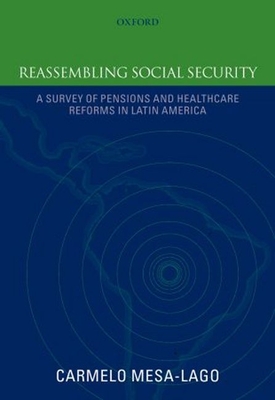 The reform of social security pensions and healthcare is a key issue for the modern world, and in many ways Latin America has acted as a social laboratory for the reform of these systems. From the reforms that took place in Chile in 1981, most pension and health care systems in the region have seen reform, and been fully or partially privatized. Many other countries considering reform of their own systems have been influenced by the policies implemented in Latin America. Yet despite the importance and influence of these reforms, until now there has not been an integrated and comprehensive analysis of the changes and their effects. This book is the result of four years of painstaking work, data collection, field research and international collaboration, and so fills the vacuum in the literature with a systematic comparison of pension and healthcare reforms in the 20 Latin American countries. It identifies reform models, and elaborates taxonomies to facilitate their understanding and comparison. Some key features of the reforms to emerge are: labour force and population coverage, equity and solidarity, sufficiency and quality of benefits, state regulation, competition and degree of privatization, efficiency and administrative costs, social participation in management, financing sources and long-term sustainability. Effects of the reforms on social security principles are measured based on recent standardized statistics and other information. Goals or assumptions of the reforms are contrasted with actual outcomes, and the pros and cons of private versus private provision assessed. Detailed policy recommendations are offered to correct current problems and improve pension and healthcare systems. This is the first book to comprehensively study these influential reforms in Latin America's pension and health care systems, and as such will be of importance to academics and researchers interested in social security and welfare policy, pensions, health care, and public policy; Social security, pension, and health care policy-makers; And social security, pension, and health care consultants and practitioners.

Carmelo Mesa-Lago is Distinguished Service Professor Emeritus of Economics and Latin American Studies at the University of Pittsburgh and has been a visiting professor or researcher in Argentina, Germany, Mexico, Spain, Uruguay, United Kingdom and the United States, as well as a lecturer in 36 countries in Asia, Europe, Latin America and North America. He is the author of 73 books/monographs and about 240 articles/chapters published in 8 languages in 33 countries, most of them on social security including pensions and healthcare. He has worked in all Latin America countries and several in the Caribbean, as well as in Germany, Egypt, Ghana and Thailand, as a regional advisor for ECLAC, a consultant with the ILO, the International Social Security Association (ISSA), PAHO, UNRISD, UNDP and other U.N. branches, as well as most international financial organizations (World Bank, Inter-American Development Bank), national and foreign foundations.