The Oxford Handbook of Populism (Paperback) 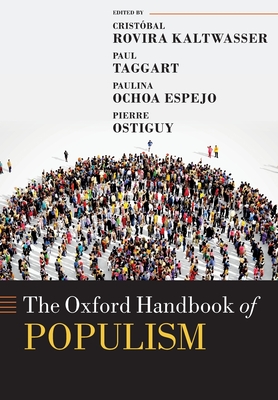 Populist forces are becoming increasingly relevant across the world, and studies on populism have entered the mainstream of the political science discipline. However, so far no book has synthesized the ongoing debate on how to study the populist phenomenon. This handbook provides state of the
art research and scholarship on populism, and lays out, not only the cumulated knowledge on populism, but also the ongoing discussions and research gaps on this topic. IThe Oxford Handbook of Populism is divided into four sections. The first presents the main conceptual approaches on populism and points out how the phenomenon in question can be empirically analyzed. The second focuses on populist forces across the world and includes chapters on Africa, Australia
and New Zealand, Central and Eastern Europe, East Asia, India, Latin America, the Post-Soviet States, the United States, and Western Europe. The third reflects on the interaction between populism and various relevant issues both from a scholarly and political point of view. Amongst other issues,
chapters analyze the relationship between populism and fascism, foreign policy, gender, nationalism, political parties, religion, social movements and technocracy. Finally, the fourth part includes some of the most recent normative debates on populism, including chapters on populism and
cosmopolitanism, constitutionalism, hegemony, the history of popular sovereignty, the idea of the people, and socialism. The handbook features contributions from leading experts in the field, and is indispensible, positioning the study of populism in political science.