An Ancient Dream Manual: Artemidorus' the Interpretation of Dreams (Hardcover) 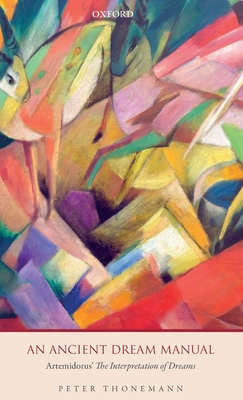 Artemidorus' Oneirocritica ('The Interpretation of Dreams') is the only dream-book which has been preserved from Graeco-Roman antiquity. Composed around AD 200, it comprises a treatise and manual on dreams, their classification, and the various analytical tools which should be applied to their interpretation, making Artemidorus both one of the earliest documented and arguably the single most important predecessor and precursor of Freud. Artemidorus travelled widely through Greece, Asia, and Italy to collect people's dreams and record their outcomes, in the process casting a vivid light on social mores and religious beliefs in the Severan age: this volume, published as a companion to the new translation of The Interpretation of Dreams by Martin Hammond in the Oxford World's Classics series, aims to provide the non-specialist reader with a readable and engaging road-map to this vast and complex text. It offers a detailed analysis of Artemidorus' theory of dreams and the social function of ancient dream-interpretation, while also aiming to foster an understanding of the ways in which Artemidorus might be of interest to the cultural or social historian of the Graeco-Roman world. Alongside chapters on Artemidorus' life, career, and world-view, it also provides valuable insights into his conceptions of the human body, sexuality, the natural world, and the gods; his attitudes towards Rome, the contemporary Greek polis, and
the social order; and his knowledge of Greek literature, myth, and history. In addition, its accessible exploration of the differences and similarities between ancient traditions of dream-analysis and modern psychoanalytic approaches will make this volume of interest to anybody with an interest in the history of dreams and dream interpretation.

Peter Thonemann, Forrest-Derow Fellow and Tutor in Ancient History, Wadham College, Oxford Peter Thonemann teaches Greek and Roman history at Wadham College, Oxford. His published books include The Birth of Classical Europe: From Troy to Augustine (Allen Lane, 2010; with Simon Price), The Maeander Valley: A Historical Geography from Antiquity to Byzantium (CUP, 2011; winner of the Runciman Prize 2012), The Hellenistic World: Using Coins as Sources (CUP, 2015; joint winner of the Royal Numismatic Society's Lhotka Memorial Prize 2018), and The Hellenistic Age, 323-30 BC (OUP, 2016). He also writes regularly on all aspects of the ancient world for the Times Literary Supplement and the Wall Street Journal.