Impossible Desire and the Limits of Knowledge in Renaissance Poetry (Hardcover) 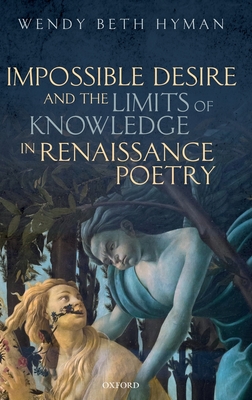 Impossible Desire and the Limits of Knowledge in Renaissance Poetry examines the limits of embodiment, knowledge, and representation at a disregarded nexus: the erotic carpe diem poem in early modern England. These macabre seductions offer no compliments or promises, but instead focus on the lovers' anticipated decline, and--quite stunningly given the Reformation context--humanity's relegation not to a Christian afterlife but to a Marvellian 'desert of vast Eternity.' In this way, a poetic trope whose classical form was an expression of pragmatic Epicureanism became, during the religious upheaval of the Reformation, an unlikely but effective vehicle for articulating religious doubt. Its ambitions were thus largely philosophical, and came to incorporate investigations into the nature of matter, time, and poetic representation. Renaissance seduction poets invited their auditors to participate in a dangerous intellectual game, one whose primary interest was expanding the limits of
knowledge. The book theorizes how Renaissance lyric's own fragile relationship to materiality and time, and its self-conscious relationship to making, positioned it to grapple with these 'impossible' metaphysical and representational problems. Although attentive to poetics, the book also challenges the commonplace view that the erotic invitation is exclusively a lyrical mode. Carpe diem's revival in post-Reformation Europe portends its radicalization, as debates between man and maid are dramatized in disputes between abstractions like chastity and material facts like death. Offered here is thus a theoretical reconsideration of the generic parameters and aspirations of the carpe diem trope, wherein questions about embodiment and knowledge are also investigations into the potentialities of literary form.

Wendy Beth Hyman, Oberlin College Wendy Beth Hyman is Associate Professor of English and Comparative Literature at Oberlin College. She received her MA and PhD from Harvard University, and her BA at Smith College. Professor Hyman is the editor of The Automaton in English Renaissance Literature, and, with Hillary Eklund, co-editor of Teaching Social Justice Through Shakespeare. She has published on early modern mechanical birds, Spenser's Faerie Queene, the influence of literary insects on early microscopy, physics and metaphysics in early modern lyric, jacquemarts and Jack Falstaff, Nashe's Unfortunate Traveller, metaphoricity and science, and the pedagogy of book history.