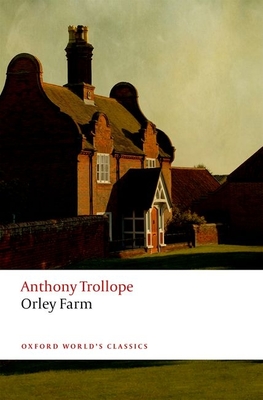 By Anthony Trollope, Francis O'Gorman (Editor)
$16.95
Unavailable, Out of Stock, or Out of Print

Trollope singled out Orley Farm for its successful combination of realistic and sensational effects which he felt to be the highest achievement of the novelist. It was greatly admired by his contemporaries, including George Eliot and G. H. Lewes. The novel centers on a case of forgery and the
anguish, guilt, and pathos of the central character, Lady Mason. Youthful marriage choices, middle-aged martial crisis, and the moving love and loss of an elderly man revolve around the legal action and the complex portrayal of Lady Mason, who is both sympathetic and wily. The novel proposes a
standard of morality higher than that embodied in the practice of an English court of law. With its concern for social issues and its extensive coverage of middle-class and landed life, Orley Farm is a novel that demands attention in the rich field of nineteenth-century fiction.

Francis O'Gorman has edited Anthony Trollope's The Duke's Children, Framley Parsonage, and The Way We Live Now for the Oxford World's Classics series, as well as John Ruskin's Praeterita and Elizabeth Gaskell's Sylvia's Lovers. He has written widely on English literature, mostly from the nineteenthcentury, and his recent publications include The Cambridge Companion to John Ruskin (2016), the Twenty-first Century Oxford Authors edition of Algernon Charles Swinburne (2016), and volume 5 of the Oxford Selected Prose of Edward Thomas on Thomas's literary criticism (2017). Francis O'Gorman, whowas educated at the University of Oxford, is Saintsbury Professor of English Literature at the University of Edinburgh and is currently editing Wilkie Collins' The Moonstone for OUP and writing a book for Bloomsbury called The Limits of Liberalism.