Only in Australia: The History, Politics, and Economics of Australian Exceptionalism (Hardcover) 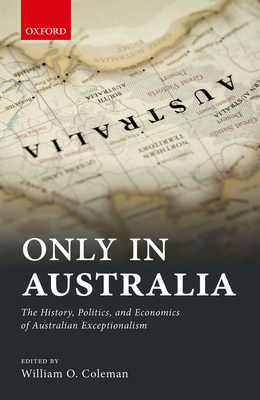 This edited volume is about the Australian difference and how Australia's economic and social policy has diverged from the approach of other countries. Australia seems to be following a 'special path' of its own that it laid down more than a century ago. Australia's distinctive bent is
manifested in a tightly regulated labour market; a heavy reliance on means testing and income taxation; a geographical centralization of political power combined with its dispersal amongst autonomous authorities, and electoral singularities such as compulsory and preferential voting. In seeking to explain this Australian Exceptionalism, the book covers a diverse range of issues: the strength and weakness of religion, democratic and undemocratic tendencies, the poverty of public debate, the role of elites, the exploitation of Australian sports stars, the politics of railways, the
backwardness of agriculture, deviation from the Westminster system, the original encounter between European and Aboriginal cultures, and the heavy taxation of tobacco. Bringing together contributions from economists, economic historians, and political scientists, the volume seeks to understand why Australia is different. It offers a range of explanations from the 'historical legacy', to material factors, historical chance, and personalities.