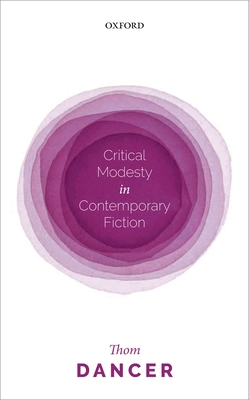 From climate catastrophe to pandemics and economic crises, the problems facing humanity can feel impossible to solve. Critical Modesty in Contemporary Fiction argues that contemporary fiction helps those who may feel despair at the enormity of such problems -- not, as usually assumed, through the ambitious search for grand solutions but rather by cultivating a temperament of modesty. This new temperament of critical modesty locates the fight for freedom and human dignity within the limited and compromised conditions in which we find ourselves. Through readings of Ian McEwan, Zadie Smith, J. M. Coetzee, and David Mitchell, Critical Modesty in Contemporary Fiction advances a claim for the value of temperament in general as a crucial analytic for understanding contemporary experience as well as for a particular temperament of critical modesty as crucial in negotiating the limits of critical and human agency that constitute our daily lives. Exploring modest forms of entangled human agency that represent an alternative to the novel of the large scale that have been most closely associated with the Anthropocene, this volume makes the surprising case that by adopting a modest stance, the novel has the potential to play a more important socio-cultural role than it has done. In doing so, it offers an engaging response to the debate over critical and surface readings, bringing novels themselves into the conversation and arguing for a fictional mode that is both critical and modest, reminding us how much we are already engaged with the world, implicated and compromised, before we start developing theories, writing stories, or acting within it.