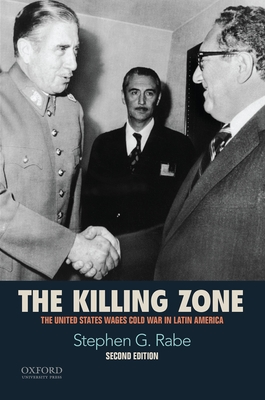 By Stephen G. Rabe
This Book Is Not Sold Online - Inquire In Store

The Killing Zone: The United States Wages Cold War in Latin America, Second Edition, is a comprehensive yet concise analysis of U.S. policies in Latin America during the Cold War. Author Stephen G. Rabe, a leading authority in the field, argues that the sense of joy and accomplishment that
accompanied the end of the Cold War, the liberation of Eastern Europe, and the collapse of the Soviet Union must be tempered by the realization that Latin Americans paid a ghastly price during the Cold War. Dictatorship, authoritarianism, the methodical abuse of human rights, and campaigns of state
terrorism characterized life in Latin America between 1945 and 1989. Countries such as Argentina, Brazil, Chile, El Salvador, and Guatemala endured appalling levels of political violence. The U.S. repeatedly intervened in the internal affairs of Latin American nations in the name of anticommunism,
destabilizing constitutional governments and aiding and abetting those who murdered and tortured. Rabe supplements his strong, provocative historical narrative with stories about the fates of ordinary Latin Americans, an extensive chronology, a series of evocative photographs, and an annotated bibliography.

Stephen G. Rabe is the Ashbel Smith Professor of History at The University of Texas at Dallas. He is the author of several books, including John F. Kennedy: World Leader (2010), U.S. Intervention in British Guiana: A Cold War Story (2005), and The Most Dangerous Area in the World: John F. KennedyConfronts Communist Revolution in Latin America (1999).