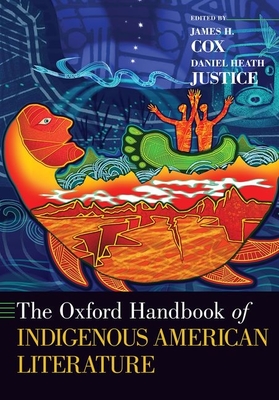 Over the course of the last twenty years, Native American and Indigenous American literary studies has experienced a dramatic shift from a critical focus on identity and authenticity to the intellectual, cultural, political, historical, and tribal nation contexts from which these Indigenous literatures emerge. The Oxford Handbook of Indigenous American Literature reflects on these changes and provides a complete overview of the current state of the field. The Handbook's forty-three essays, organized into four sections, cover oral traditions, poetry, drama, non-fiction, fiction, and other forms of Indigenous American writing from the seventeenth through the twenty-first century. Part I attends to literary histories across a range of communities, providing, for example, analyses of Inuit, Chicana/o, Anishinaabe, and M tis literary practices. Part II draws on earlier disciplinary and historical contexts to focus on specific genres, as authors discuss Indigenous non-fiction, emergent trans-Indigenous autobiography, Mexicanoh and Spanish poetry, Native drama in the U.S. and Canada, and even a new Indigenous children's literature canon. The third section delves into contemporary modes of critical inquiry to expound on politics of place, comparative Indigenism, trans-Indigenism, Native rhetoric, and the power of Indigenous writing to communities of readers. A final section thoroughly explores the geographical breadth and expanded definition of Indigenous American through detailed accounts of literature from Indian Territory, the Red Atlantic, the far North, Yucat n, Amerika Samoa, and Francophone Quebec. Together, the volume is the most comprehensive and expansive critical handbook of Indigenous American literatures published to date. It is the first to fully take into account the last twenty years of recovery and scholarship, and the first to most significantly address the diverse range of texts, secondary archives, writing traditions, literary histories, geographic and political contexts, and critical discourses in the field.

James H. Cox is Associate Professor of English and the co-founder of Native American and Indigenous Studies at the University of Texas at Austin. Daniel Heath Justice (Cherokee) is Canada Research Chair of Indigenous Literatures and Expressive Culture and Associate Professor of First Nations Studies and English at the University of British Columbia.