Liberal Self-Determination in a World of Migration (Hardcover) 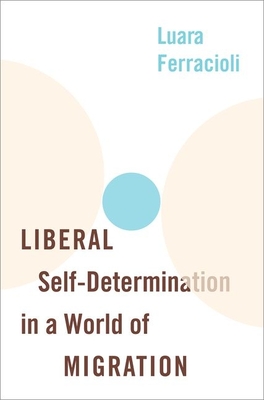 The values of freedom and equality are at the heart of what it means for liberal states to do justice to their citizens. Yet, when it comes to the question of whether liberal states are capable of realizing the values of freedom and equality while controlling their borders, many philosophers
are skeptical that liberalism and existing immigration arrangements can in fact be reconciled. After all, liberal states often deny entrance to prospective immigrants who are fleeing extreme forms of violence. They also often police their borders in ways that are discriminatory and stigmatizing,
contributing to a situation where immigrants are treated as morally inferior by society at large. Such practices conflict strongly with any commitment to the values of freedom and equality. Luara Ferracioli here focuses on three key questions regarding the movement of persons across international borders: What gives some residents of a liberal society a right to be considered citizens of that society such that they have a claim to make decisions with regard to its political future? And
do citizens of a liberal society have a prima facie right to exclude prospective immigrants despite their commitment to the values of freedom and equality? Finally, if citizens have this prima facie right to exclude prospective immigrants, are there moral requirements regarding how they may exercise
it? The book therefore tackles the most pressing philosophical questions that arise from immigration: the questions of who can exercise self-determination, and why they have such a right in the first place.