Postville: A Clash of Cultures in Heartland America (Paperback) 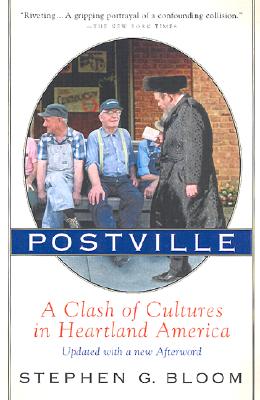 In 1987, a group of Lubavitchers, one of the most orthodox and zealous of the Jewish sects, opened a kosher slaughterhouse just outside tiny Postville, Iowa (pop. 1,465). When the business became a worldwide success, Postville found itself both revived and divided. The town's initial welcome of the Jews turned into confusion, dismay, and even disgust. By 1997, the town had engineered a vote on what everyone agreed was actually a referendum: whether or not these Jews should stay.

The quiet, restrained Iowans were astonished at these brash, assertive Hasidic Jews, who ignored the unwritten laws of Iowa behavior in almost every respect. The Lubavitchers, on the other hand, could not compromise with the world of Postville; their religion and their tradition quite literally forbade it. Were the Iowans prejudiced, or were the Lubavitchers simply unbearable?

Award-winning journalist Stephen G. Bloom found himself with a bird's-eye view of this battle and gained a new perspective on questions that haunt America nationwide. What makes a community? How does one accept new and powerfully different traditions? Is money more important than history? In the dramatic and often poignant stories of the people of Postville - Jew and gentile, puzzled and puzzling, unyielding and unstoppable - lies a great swath of America today.

Stephen G. Bloom is an award-winning journalist and has been a reporter for the Los Angeles Times, the San Jose Mercury News, and other major newspapers. He now teaches journalism at the University of Iowa in Iowa City, where he lives with his wife and son.

A gripping portrayal of a confounding collision."-The New York Times

A fascinating portrait of a town torn in two. [A] thoughtful, compelling book."
-The Dallas Morning News

Foreign as these two tiny and tightly circumscribed communities are to most outsiders, the story of their clash . . . is compelling and important."
-The Miami Herald