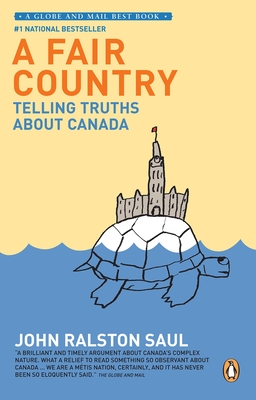 By John Ralston Saul
$20.00
Unavailable, Out of Stock, or Out of Print

In this startlingly original vision of Canada, renowned thinker John Ralston Saul argues that Canada is a Métis nation, heavily influenced and shaped by Aboriginal ideas: Egalitarianism, a proper balance between individual and group, and a penchant for negotiation over violence are all Aboriginal values that Canada absorbed. An obstacle to our progress, Saul argues, is that Canada has an increasingly ineffective elite, a colonial non-intellectual business elite that doesn't believe in Canada. It is critical that we recognize these aspects of the country in order to rethink its future.

JOHN RALSTON SAUL is Canada’s leading public intellectual. Declared a “prophet” by Time magazine, Saul has received many awards and prizes, including Chile’s Pablo Neruda Medal. He is president of PEN International, an organization dedicated to freedom of expression. He has published fourteen works, which have been translated into twenty-five languages in thirty-six countries, the most recent of which is The Comeback, an examination of the remarkable return to power of Aboriginal people in Canada. Saul lives in Toronto.

“[A] brilliant and timely argument about Canada’s complex nature and our country’s best future course. What a relief it is to read something so observant about Canada. . . . we are a Métis nation, certainly, and it has never been so eloquently said.” —The Globe and Mail

“Gutsy and exciting. . . . A Fair Country has the potential to change the way Canadians see themselves forever. It offers a romantic and heroic vision, and it’s a stirring and unpretentious read.” —Winnipeg Free Press

“There’s something admirable, possibly even heroic, in the earnest anger of John Ralston Saul as he bangs away at the theme of his book A Fair Country.” —National Post

“[A Fair Country is] that rare work of political thought that, by virtue of its daring, is both thrilling and sobering. One reads it with the even rarer sense that it had to be written.” —The Gazette (Montreal)

“Any Canadian reading the book, or learning about its content, will think of Canada differently.” —Toronto Star

“A stinging assessment of public- and private-sector leaders paralyzed by a ‘colonial inferiority complex.’” —Edmonton Journal

“An excellent first step to recovery. By seriously examining Aboriginal influences in Canadian history, Saul goes some way to curing the ongoing dysfunction suffered by—not Aboriginal Canadians—but by mainstream Canadians. . . . A consequence of Saul’s vision is that Western Canada assumes greater influence in the Canadian story. . . . Makes a lot of sense.” —Calgary Herald

“Always challenging . . . [A Fair Country] is a new and much needed foundation for a profoundly new (multi-) national self-definition.” —Now (Toronto)

“Anyone who is the least bit curious about Canadian identity will find A Fair Country a fascinating text. Saul goes to the heart of the matter and demonstrates how Aboriginal inspiration has defined us as a unique people whose roots are both European and Native.” —Hour (Montreal)

“An intellectually engaging effort to reframe our view of the relationship between Aboriginal peoples and Canadians who have arrived (or been born to migrants) over the past four centuries. . . . Maybe—maybe—Saul has begun the dialogue that will create a powerful new national narrative(the Greeks called it mythos) to reframe this relationship from one of ignorance and racism to that of equality and respect.” —Michael Adams, author of Fire and Ice: The United States, Canada and the Myth of Converging Values

“From the cover illustration that refers to the Anishnabeck world view of Turtle Island to the notion of the all-inclusive circle as opposed to the Anglo/Franco/European linear view, Saul challenges us to re-examine our history as it applies to our contemporary world view, our contemporary lives and our future.” —Inverness Oran (Inverness, Nova Scotia)

“[A Fair Country] shines light on the failings of our national capital and the people who live there.” —Ottawa Citizen