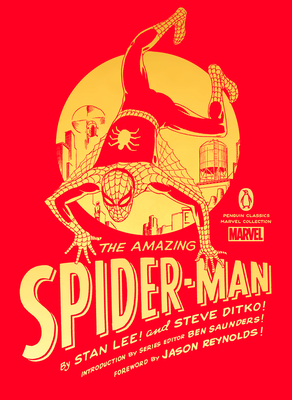 This is book number 1 in the Penguin Classics Marvel Collection series.

The Penguin Classics Marvel Collection presents the origin stories, seminal tales, and characters of the Marvel Universe to explore Marvel’s transformative and timeless influence on an entire genre of fantasy.

Collects “Spider-Man!” from Amazing Fantasy #15 (1962); The Amazing Spider-Man #1-4, #9, #10, #13, #14, #17-19 (1963-1964); “Goodbye to Linda Brown” from Strange Tales #97 (1962); “How Stan Lee and Steve Ditko Create Spider-Man!” from The Amazing Spider-Man Annual #1 (1964). It is impossible to imagine American popular culture without Marvel Comics. For decades, Marvel has published groundbreaking visual narratives that sustain attention on multiple levels: as metaphors for the experience of difference and otherness; as meditations on the fluid nature of identity; and as high-water marks in the artistic tradition of American cartooning, to name a few.

This anthology contains twelve key stories from the first two years of Spider-Man’s publication history (from 1962 to 1964). These influential adventures not only transformed the super hero fantasy into an allegory for the pain of adolescence but also brought a new ethical complexity to the genre—by insisting that with great power there must also come great responsibility.

A foreword by Jason Reynolds and scholarly introductions and apparatus by Ben Saunders offer further insight into the enduring significance of The Amazing Spider-Man and classic Marvel comics.

Writer-editor Stan Lee (1922– 2018) and artist Jack Kirby made comic book history in 1961 with The Fantastic Four #1. The suc­cess of its new style inspired Lee and his many collaborators to de­velop a number of super heroes, including, with Jack Kirby, the Incredible Hulk and the X‑Men; with Steve Ditko, the Amazing Spider- Man and Doctor Strange; and with Bill Everett, Daredevil. Lee oversaw the adventures of these creations for more than a decade before handing over the editorial reins at Marvel to others and focusing on developing Marvel’s properties in other media. For the remainder of his long life, he continued to serve as a creative figure­head at Marvel and as an ambassador for the comics medium as a whole. In his final years, Lee’s signature cameo appearances in Marvel’s films established him as one of the world’s most famous faces.

Steve Ditko (1927– 2018) began his comics career in the antholo­gies of the 1950s, where his unique style quickly earned him recog­nition and respect. He was recruited in 1958 to join Stan Lee’s Atlas Comics, which was later transformed into Marvel, where his talent for expressionistic caricature contrasted well with Jack Kirby’s gift for widescreen- style spectacle. In 1962, in the pages of Amazing Fantasy, Ditko and Lee brought to life Peter Parker, the Amazing Spider- Man, changing the industry forever. During the same pe­riod, he also co‑created (with Lee) and plotted the first adventures of Doctor Strange. After leaving Marvel in 1966, Ditko drew the Blue Beetle and Captain Atom for Charlton Comics; the Creeper and Shade the Changing Man for DC Comics; and Mr. A., an inde­pendent creation whose black-and-white vision of morality reflected Ditko’s own political philosophy. Ditko returned to Marvel during the late 1970s and remained there for much of the 1980s, co‑creating Speedball, the Masked Marvel, the Unbeatable Squirrel Girl, and other prominent characters.

Jason Reynolds is an award- winning and number one New York Times bestselling author. Reynolds’ many books include Miles Morales: Spider- Man; the Track series (Ghost, Patina, Sunny, and Lu); Long Way Down, which received a Newbery Honor, a Printz Honor, and a Coretta Scott King Honor; and Look Both Ways, which was a National Book Award Finalist. His latest book, Stamped: Racism, Antiracism, and You, is a collaboration with Ibram X. Kendi. Reynolds is the 2020– 2021 National Ambassador for Young People’s Literature and has appeared on The Daily Show with Trevor Noah, Late Night with Seth Meyers, and CBS This Morning. He is on the faculty of the MFA in Creative Writing Program at Lesley University and lives in Washington, DC. You can find his ramblings at jasonwritesbooks.com.

Ben Saunders is a professor of English at the University of Oregon. He is the author of Desiring Donne: Poetry, Sexuality, Interpreta­tion and Do the Gods Wear Capes?: Spirituality, Fantasy, and Su­perheroes, as well as numerous critical essays on subjects ranging from the writings of Shakespeare to the recordings of Little Richard. He has also curated several museum exhibitions of comics art, in­cluding the record- breaking, multimedia touring show Marvel: Uni­verse of Super Heroes— a retrospective exploring the artistic and cultural impact of Marvel Comics from 1939 to the present.