Last Stories and Other Stories (Paperback) 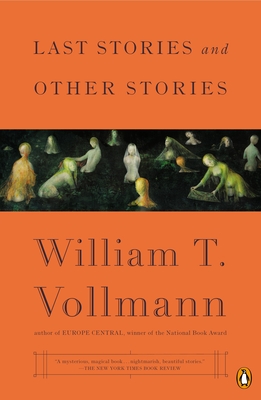 By William T. Vollmann
This Book Is Not Sold Online - Inquire In Store
Not In Stock/Special Order

One day a couple of years ago I was minding my bookseller business when in walked William T. Vollmann himself! After I excitedly said "Hi! What are you doing here?" (in my head I meant 'what are you doing here in SF?') he said in his quiet, polite way "Shopping for books."He wandered the store for a while as I tried to patiently wait for him to head to the registers to purchase his selections. When he eventually made his way up he was friendly as always and asked what I was reading, to which I answered The Shining.

Long story short, after telling me he once stayed in the hotel where they filmed The Shining and got fully creeped out, he told me he was working on a collection of ghost stories. This was the best, and most terrifying answer he could have given me. Then it got more terrifying because I had to wait these long 2+ years for the book to be finished and published. And now here it is, in all of its bizarre, freaky, Vollmann glory!

Watch for Vollmann’s new work of nonfiction, No Immediate Danger, coming in April of 2018

A Bohemian farmer’s dead wife returns to him, and their love endures, but at a gruesome price. A geisha prolongs her life by turning into a cherry tree. A journalist, haunted by the half-forgotten killing of a Bosnian couple, watches their story, and his own wartime tragedy, slip away from him. A dying American romances the ghost of his high school sweetheart while a homeless salaryman in Tokyo animates paper cutouts of ancient heroes.

Are ghosts memories, fantasies, or monsters? Is there life in death? Vollmann has always operated in the shadowy borderland between categories, and these eerie tales, however far-flung their settings, all focus on the attempts of the living to avoid, control, or even seduce death. Vollmann’s stories will transport readers to a fantastical world where love and lust make anything possible.

William T. Vollmann is the author of ten novels, including Europe Central, which won the National Book Award.  He has also written four collections of stories, including The Atlas, which won the PEN Center USA West Award for Fiction, a memoir, and six works of nonfiction, including Rising Up and Rising Down and Imperial, both of which were finalists for the National Book Critics Circle Award. He is the recipient of a Whiting Writers Award and the Strauss Living Award from the American Academy of Arts and Letters.  His journalism and fiction have been published in The New Yorker, Harpers, Esquire, Granta, and many other publications.

Praise for Last Stories and Other Stories

“Mysterious, magical. . .nightmarish, beautiful. . .Vollmann is an exquisite magician of a baroque stylistic obscurity that changes the reader slowly but surely. . .these troubled, voluptuous narratives are deeply concerned with the bewildering effects of trauma and loss. . .the book took reading and rereading for me, just as an intensely odd, seductive love song asks to be heard again and again.  But Vollmann is a great storyteller, and the weird aurality is a critical part of these tales.”—Kate Bernheimer, The New York Times Book Review

“Transporting [and] bizarrely beautiful. . .[these stories] call to mind no living writers, summoning instead Calvino, Marquez, Kafka. . .So mysterious are Vollmann’s motivations, so sweeping his interests, so prodigious is his production, so vastly different is the thing he does from the thing that everyone else does that he may actually be a visitor from another dimension come to report comprehensively back to his home planet.” – Esquire

“A phantasmagoric book, blending bits of Lovecraft and Dreiser, David Foster Wallace and Scheherazade, Poe and the Brothers Grimm. . .builds to a suite of love stories, intended not to shock the unshockable but to trace the far reaches of this author’s obsessions with sex and death.” – The New York Times

“Every story leaves someone behind, and so loss in itself, whether violent or beautiful, becomes an unrelenting thematic constant.  In another writer’s hands this would seem like a gloomy trudge, but Vollmann invigorates the subject with folkloric swashbuckling bluster. . .at best, the stories are odd, transportive, and of the blackest humor.”—The Los Angeles Times

“Don’t be afraid of the bricklike mass of this collection, or of Vollmann’s forbidding reputation.  Fear only the spectres and vampires that invest these 32 stories with highbrow goth.”—New York Magazine

“A sprawling, enchanting casket of curiosities. . .these stories range from novella-length to just a single paragraph.  In their elegant, elegiac meditations on death and the afterlife, we cross broad terrain, including geishas in ancient Japan, vampires in preindustrial Bohemia, and bombings in modern-day Sarajevo.”—Atlantic.com

"Vollmann’s fiction has always defied easy categorization. Here, he straddles, twists, and morphs action-adventure, horror, political thriller, fantasy, and literary fiction. What gives the book coherence is his singular style:  elaborate and picaresque, with a rich vocabulary. . .Mainstays of horror and the supernatural figure prominently, and it’s especially exciting to read these pop-fiction conventions treated with Vollmann’s narrative richness.”—Publishers Weekly