Urban Forests: A Natural History of Trees and People in the American Cityscape (Paperback) 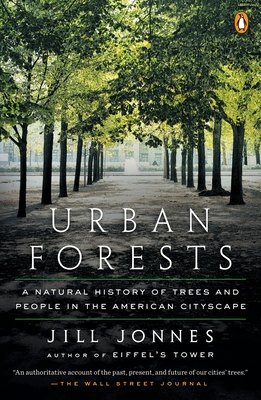 “Far-ranging and deeply researched, Urban Forests reveals the beauty and significance of the trees around us.” —Elizabeth Kolbert, Pulitzer Prize-winning author of The Sixth Extinction

“Jonnes extols the many contributions that trees make to city life and celebrates the men and women who stood up for America’s city trees over the past two centuries. . . . An authoritative account.” —Gerard Helferich, The Wall Street Journal

“We all know that trees can make streets look prettier. But in her new book Urban Forests, Jill Jonnes explains how they make them safer as well.” —Sara Begley, Time Magazine

A celebration of urban trees and the Americans—presidents, plant explorers, visionaries, citizen activists, scientists, nurserymen, and tree nerds—whose arboreal passions have shaped and ornamented the nation’s cities, from Jefferson’s day to the present

As nature’s largest and longest-lived creations, trees play an extraordinarily important role in our cities; they are living landmarks that define space, cool the air, soothe our psyches, and connect us to nature and our past. Today, four-fifths of Americans live in or near urban areas, surrounded by millions of trees of hundreds of different species. Despite their ubiquity and familiarity, most of us take trees for granted and know little of their fascinating natural history or remarkable civic virtues.

Jill Jonnes’s Urban Forests tells the captivating stories of the founding mothers and fathers of urban forestry, in addition to those arboreal advocates presently using the latest technologies to illuminate the value of trees to public health and to our urban infrastructure. The book examines such questions as the character of American urban forests and the effect that tree-rich landscaping might have on commerce, crime, and human well-being. For amateur botanists, urbanists, environmentalists, and policymakers, Urban Forests will be a revelation of one of the greatest, most productive, and most beautiful of our natural resources.

Jill Jonnes is the author of Urban Forests, Eiffel’s Tower, Conquering Gotham, Empires of Light, and South Bronx Rising. She was named a National Endowment for the Humanities scholar and has received several grants from the Ford Foundation.

“In Urban Forests, Jill Jonnes extols the many contributions that trees make to city life . . . [and] celebrates [the] men and women who stood up for America’s city trees over the past two centuries. . . . Ms. Jonnes offers an authoritative and admirably nontechnical account of the past, present and future of our cities’ trees.”
—Gerard Helferich, The Wall Street Journal

“America’s cities are full of trees but despite encountering them all the time we tend to take them for granted or know little about their natural history and civic virtues. But in a new book, Urban Forests, author Jill Jonnes says trees play an extraordinarily important role in our cityscapes and they are the dominant component of what is now called green infrastructure.”
—Diane Rehm, The Diane Rehm Show NPR

“We all know that trees can make streets look prettier. But in her new book Urban Forests, Jill Jonnes explains how they make them safer as well. . . . It’s no wonder then, that cities like New York, Denver and Sacramento have already invested heavily in urban planting. Now Jonnes argues that others should follow their lead. It’s time, she writes, ‘to get serious about creating the lushest tree canopies we can nurture.’”
—Sara Begley, Time

“Next time you’re outside, look up. Trees are so ubiquitous that it’s easy to take them for granted. But Urban Forests makes you stop and pay attention to the ‘living landmarks’ standing tall in America’s cities. From Thomas Jefferson’s time to present day, Jill Jonnes explores the essential roles trees play in urban centers—filtering air, providing habitat, offering shade, calming nerves and more. I loved this book because it’s both for history lovers and for tree devotees. It’s a good read—best done under the canopy of your favorite tree.”
—Jeanine Herbst, NPR Books

“Jonnes deftly outlines the mission to plant trees and quantify their utility, and the campaigns to eviscerate pests that have ailed them. And there’s a strong, data-backed case for city trees . . . But beyond quantifying those dollars-and-sense benefits, the book soars when Jonnes teases out the profound emotional connection city dwellers feel towards the nature that surrounds them . . . Perhaps the most affecting portions of Jonnes’s book delve into trees as symbols of resilience . . . as much as trees can be transportive, inviting imagination to alight on the branches arcing towards the sky, they can also anchor us. Trees, with their graceful grit, embody some of the very best traits that we can hope to emulate.”
—Jessica Leigh Hester, The Atlantic CityLab

“The deforestation that ran rampant in the United States through the nineteenth century spurred a band of doughty dendrologists and politicians to forest the cities. Jill Jonnes’ stimulating history chronicles their collective story, from William Hamilton (who reintroduced Ginkgo Biloba to North America millennia after it was glaciated out) to the many scientists struggling to control blights and beetles. Today, Jonnes shows, despite trees’ measurable benefits for human well-being and microclimate regulation, urban forestation remains at risk from short-sighted redevelopment.”
—Barbara Kiser, Nature

“Even if you can’t tell a fir from a pine, you probably judge the quality of your surroundings by its trees. For city residents, trees are perhaps the most accessible form of the natural world—but that wasn’t always the case. . . . Jonnes traces the history of America’s urban trees over two centuries—they were once viewed as an economic commodity, but people later invested personal and patriotic meaning in individual trees and in the act of planting. . . . Urban Forests goes beyond trees, exploring a nation’s changing relationship with the whole natural world.”
—Jeremy B. Yoder, Sierra Club Magazine

“Urban Forests contains some of the most readable and insightful arboreal prose I have ever come across. Jonnes dives deeply into trees and their roles in American cities through various eras of history. The text is laced with facts, dates, and figures gleaned from recent scientific studies that, rather than making one’s eyes glaze over, inspire a profound respect for these resilient trees and the people who champion them. . . . A spellbinding storyteller, Jonnes relates the heartbreaking stories of America’s most devastating arboreal tragedies—the annihilation of native elm, chestnut, and now ash trees by introduced pests and diseases. She counterbalances vivid scenes of entire neighborhoods being clear cut with the diligent efforts of the people trying to save these trees from extinction. Through these and other equally compelling anecdotes, the book elucidates the powerful emotional connection humans have with trees.”
—Guy Sternberg, The American Gardner

“A fascinating slice of both urban and natural history that tree lovers and everyone interested in city life will enjoy.”
—Booklist

“This book deserves great interest. . . . Scientific without being tedious and political only in the sense of our responsibility to and respect for nature (or lack thereof), the narrative is sure to fascinate nature lovers and natural scientists alike. . . . A lovingly written book that should appeal to most city dwellers and all tree lovers.”
—Kirkus Reviews

“Far-ranging and deeply researched, Urban Forests reveals the beauty and significance of the trees around us.”
—Elizabeth Kolbert, Pulitzer Prize-winning author of The Sixth Extinction