The Turnip Princess and Other Newly Discovered Fairy Tales (Paperback) 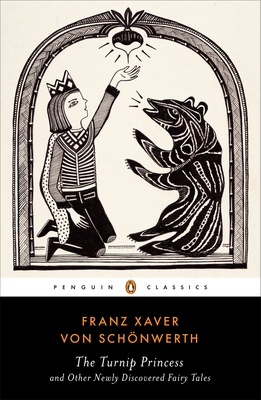 Move over, Cinderella: Make way for the Turnip Princess! And for the “Cinderfellas” in these stories, which turn our understanding of gender in fairy tales on its head.

With this volume, the holy trinity of fairy tales—the Brothers Grimm, Charles Perrault, and Hans Christian Andersen—becomes a quartet. In the 1850s, Franz Xaver von Schönwerth traversed the forests, lowlands, and mountains of northern Bavaria to record fairy tales, gaining the admiration of even the Brothers Grimm. Most of Schönwerth's work was lost—until a few years ago, when thirty boxes of manu­scripts were uncovered in a German municipal archive. Now, for the first time, Schönwerth's lost fairy tales are available in English. Violent, dark, and full of action, and upending the relationship between damsels in distress and their dragon-slaying heroes, these more than seventy stories bring us closer than ever to the unadorned oral tradition in which fairy tales are rooted, revolutionizing our understanding of a hallowed genre.

For more than seventy years, Penguin has been the leading publisher of classic literature in the English-speaking world. With more than 1,500 titles, Penguin Classics represents a global bookshelf of the best works throughout history and across genres and disciplines. Readers trust the series to provide authoritative texts enhanced by introductions and notes by distinguished scholars and contemporary authors, as well as up-to-date translations by award-winning translators.

Franz Xaver von Schönwerth (1810–1886) had a successful career in law and the Bavarian royal court before devoting himself full-time to cataloging the customs and folktales of his homeland.

Erika Eichenseer (editor) is the director of the Franz Xaver von Schönwerth Society. She lives in Germany.

Maria Tatar (translator and introducer) is the John L. Loeb Professor of Folklore and Mythology and Germanic Languages and Literatures at Harvard University. She lives in Cambridge, Massachusetts.

Engelbert Süss (illustrations) is a sculptor, glass-artist, and illustrator. He created the bronze statue King of Dwarfs for the Schönwerth Fairytale Path in Sinzing, Bavaria.

“The tales are fascinating— . . . they have all their original, fiercely oddball appeal.” —NPR, “Best Books of the Year”

“This stunning fairy-tale find is grimmer than Grimm. . . . Here is real treasure. Just watch out for the witch.” —The Washington Post

“Schönwerth’s tales have a compositional fierceness and energy rarely seen in stories gathered by the Brothers Grimm or Charles Perrault.” —The New Yorker

“In the hands of renowned folklorist and scholar Maria Tatar, these seventy-two stories come to life with a snappy matter-of-factness, racing with palpable energy through fantasy landscapes that always feel close to home.” —NPR.org

“[A] parade of giants, gnomes, kings, and witches . . . Anyone familiar with Disney or the Grimms will be surprised by these brief, enigmatic tales. . . . They teach us to read for the simple thrill of the tales themselves, their humor and their zest. . . . In their simple charm and wild imagination they remind us of the foundation of literature itself: the impulse to entertain.” —Pittsburgh Post-Gazette

“[This] new collection of German folk stories . . . challenges preconceptions about many of the most commonly known fairytales. . . . Many of the stories centre around surprisingly emancipated female characters.” —The Guardian

“Schönwerth’s legacy counts as the most significant collection in the German-speaking world in the nineteenth century.” —Daniel Drascek, University of Regensburg

“These eminently enjoyable tales offer a rich new take on the material of the Grimms and Andersen. . . . The tales are vigorous, direct, and less artful then those of the Grimms, suggesting greater authenticity, closer to the source.” —Library Journal