The Theory of Moral Sentiments (Paperback) 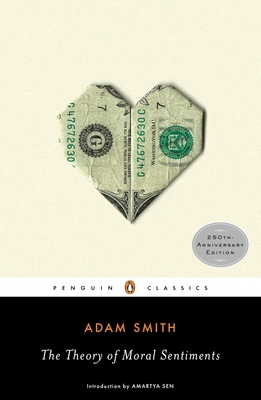 Best known for his revolutionary free-market economics treatise The Wealth of Nations, Adam Smith was first and foremost a moral philosopher. In his first book, The Theory of Moral Sentiments, he investigated the flip side of economic self-interest: the interest of the greater good. Smith's classic work advances ideas about conscience, moral judgment, and virtue that have taken on renewed importance in business and politics.

Adam Smith was born in Scotland, in 1723, and received his early education at the local burgh school. He subsequently attended Glasgow University (1737-1740), and Balliol College, Oxford (1740-1746). Two years after his return to Scotland, Smith moved to Edinburgh, where he delivered lectures on Rhetoric. In 1751 Smith was appointed Professor of Logic at Glasgow, but was translated to chair of Moral Philosophy in 1752. The Theory of Moral Sentiments was published in 1759, and The Wealth of Nations in 1776, the same year as the Declaration of Independence.

Amartya Sen (introduction) is a Nobel Prize-winning economist, known for his work on the way economics affects the well-being of humans. Formerly the Master of Trinity College, Cambridge, he is now the Thomas W. Lamont University Professor of Economics and Philosophy at Harvard University. His many books include Development as Freedom, Identity and Violence, and The Idea of Justice.

Ryan Patrick Hanley (editor) is the author of Adam Smith and the Character of Virtue and Our Great Purpose: Adam Smith on Living a Better Life, and the editor of Adam Smith: His Life, Thought, and Legacy. A professor of political science at Boston College, he has been the recipient of fellowships from the Mellon Foundation and the National Endowment for the Humanities.

"One of the truly outstanding books in the intellectual history of the world . . . A global manifesto of profound significance to the interdependent world in which we live. It is indeed a book of amazing reach and contemporary relevance." ―Amartya Sen, from the Introduction