Essays in Idleness and Hojoki (Paperback) 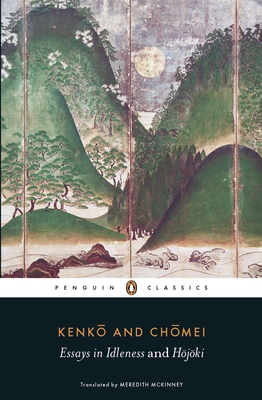 New to Penguin Classics: two of the most important Buddhist tracts from Japan

Both of these works on life’s fleeting pleasures are by Buddhist monks from medieval Japan, but each represents a different worldview. In Essays in Idleness, his lively and sometimes ribald collection of anecdotes, advice, and observations, Kenko displays his fascination with earthly matters. In the short memoir Hojoki, however, Chomei recounts his decision to withdraw from worldly affairs and live as a hermit.

KENKO (1238-?) was born in Kyoto. He became a monk probably in his late twenties, and was also noted as a calligrapher. Today he is remembered for his wise and witty aphorisms.

CHOMEI (1155-1216) was born into a family of Shinto priests at at time when the stable world of the court was rapidly breaking up. He became an important poet of his day, and at the age of fifty withdrew from the world to become a tonsured monk.

MEREDITH McKINNEY (translator / introducer) is a translator of Japanese literature, both contemporary and classical, and has translated The Pillow Book and Kokoro for Penguin Classics. She lived in Japan for twenty years and is currently a visiting fellow at the Australian National University in Canberra.