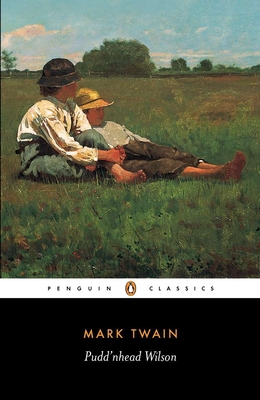 At the beginning of Pudd'nhead Wilson a young slave woman, fearing for her infant's son's life, exchanges her light-skinned child with her master's.  From this rather simple premise Mark Twain fashioned one of his most entertaining, funny, yet biting novels.  On its surface, Pudd'nhead Wilson possesses all the elements of an engrossing nineteenth-century mystery:  reversed identities, a horrible crime, an eccentric detective, a suspenseful courtroom drama, and a surprising, unusual solution.  Yet it is not a mystery novel.  Seething with the undercurrents of antebellum southern culture, the book is a savage indictment in which the real criminal is society, and racial prejudice and slavery are the crimes.  Written in 1894, Pudd'nhead Wilson glistens with characteristic Twain humor, with suspense, and with pointed irony:  a gem among the author's later works.

Mark Twain, considered one of the greatest writers in American literature, was born Samuel Clemens in Florida, Missouri, in 1835, and died in Redding, Connecticut in 1910. As a young child, he moved with his family to Hannibal, Missouri, on the banks of the Mississippi River, a setting that inspired his two best-known novels, The Adventures of Tom Sawyer and Adventures of Huckleberry Finn. In his person and in his pursuits, he was a man of extraordinary contrasts. Although he left school at 12 when his father died, he was eventually awarded honorary degrees from Yale University, the University of Missouri, and Oxford University. His career encompassed such varied occupations as printer, Mississippi riverboat pilot, journalist, travel writer, and publisher. He made fortunes from his writing but toward the end of his life he had to resort to lecture tours to pay his debts. He was hot-tempered, profane, and sentimental—and also pessimistic, cynical, and tortured by self-doubt. His nostalgia for the past helped produce some of his best books. He lives in American letters as a great artist, described by writer William Dean Howells as “the Lincoln of our literature.” Twain and his wife, Olivia Langdon Clemens, had four children—a son, Langdon, who died as an infant, and three daughters, Susy, Clara, and Jean.

Malcolm Bradbury (1932–2000) was an English novelist, critic, television dramatist, and professor of American studies and creative writing. Some of his most well-known books include The History Man, which won the Royal Society of Literature's W. H. Heinemann Prize and was adapted into a famous television series; and Rates of Exchange, which was shortlisted for the Man Booker Prize. Professor Bradbury was awarded the CBE in 1991 for his services to literature and was knighted in the 2000 New Year's Honours list.