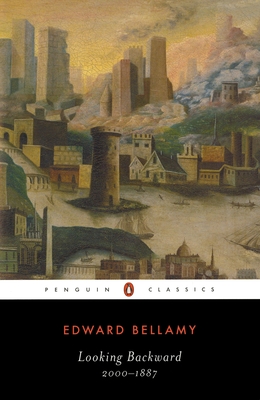 By Edward Bellamy, Cecelia Tichi (Introduction by)
$16.00
On Our Shelves Now - Please allow up to 48-hours for Curbside Pickup orders to be processed.

It is the year 2000-and full employment, material abundance and social harmony can be found everywhere. This is the America to which Julian West, a young Bostonian, awakens after more than a century of sleep. West's initial sense of wonder, his gradual acceptance of the new order and a new love, and Bellamy's wonderful prophetic inventions - electric lighting, shopping malls, credit cards, electronic broadcasting - ensured the mass popularity of this 1888 novel. But however rich in fantasy and romance, Looking Backward is a passionate attach on the social ills of nineteenth-century industrialism and a plea for social reform and moral renewal. In her introduction, Cecelia Tichi discusses how the novel echoes the anguish and hopes of its own age while it embodies a sustaining myth of the American literary tradition-that man's perfectibility is attainable in the New World.

Edward Bellamy (March 26, 1850 – May 22, 1898) was an American author and socialist, most famous for his utopian novel, Looking Backward, 2000–1887, a tale set in the distant future of the year 2000. Bellamy's early novels, including Six to One (1878), Dr. Heidenhoff's Process (1880), and Miss Ludington's Sister (1885) did not bring him much renown, but a turn to utopian science fiction with Looking Backward, published in January 1888, captured the public imagination and catapulted Bellamy to literary fame. Within a year the book had sold some 200,000 copies and by the end of the 19th century it had sold more copies than nearly any other book published in America up to that time, as well as spawning political movements around the country. Bellamy died of tuberculosis at the age of 48.