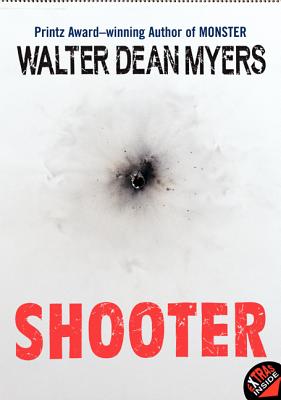 By Walter Dean Myers
$11.99
Unavailable, Out of Stock, or Out of Print

The groundbreaking and widely praised novel about a school shooting, from the acclaimed author of Monster. Multiple narratives, a personal journal, and newspaper and police reports add perspective and pull readers into the story.

"Questions of guilt and innocence drive the plot and stay with the reader," said Hazel Rochman in a starred Booklist review. "Highly readable."

"A haunting story that uncovers the pain of several high school students," according to Teenreads.com. "It explores the tragedies of school violence and how the result of bullying can go to the most dramatic extreme. Myers has a gift for expressing the voices of his characters. Shooter is not a light read, but it will leave you reeling."

Walter Dean Myers was the New York Times bestselling author of Monster, the winner of the first Michael L. Printz Award; a former National Ambassador for Young People's Literature; and an inaugural NYC Literary Honoree. Myers received every single major award in the field of children's literature. He was the author of two Newbery Honor Books and six Coretta Scott King Awardees. He was the recipient of the Margaret A. Edwards Award for lifetime achievement in writing for young adults, a three-time National Book Award Finalist, as well as the first-ever recipient of the Coretta Scott King-Virginia Hamilton Award for Lifetime Achievement.